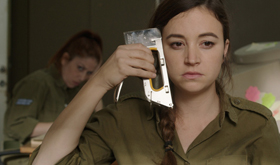 The films exported from Israel in recent years all share a common thread: internal dysfunction. 5 Broken Cameras, a 2012 documentary submission to the Academy, chronicled strife and injustice with neighbouring Palestine through the eyes of a Palestinian. Talya Lavie’s Zero Motivation, a black comedy presenting the mundane lives of female Israeli soldiers, bears similar discontent. Zero Motivation follows a group of Israeli female soldiers at an army base in the middle of the desert. Over a year the landscape, their office and the work remain static. Zohar and Daffi, two best friends who do not quite belong with others, pull pranks and avoid work by any means necessary. This behaviour is noticed by staff leader Rama, who in turn assigns the two overly tedious tasks. This mundane life is acceptable until a new recruit arrives to replace Daffi, who desperately wants to leave for Tel Aviv. Hurt that her best friend seeks a life outside of their humdrum life of annoying Rama and playing Minesweeper, Zohar does everything to make Daffi stay.

Fulfilling the eccentric Zohar and Daffi are Dana Ivgy and Nelly Tagar. Like characteristic cinematic couples, they begin inseparable only to diverge. The funny as well as solemn schism is wonderfully demonstrated by the two women: both are comedic, both are dramatic. With Ivgy’s Israeli Academy Award win in 2004 and Tagar’s permanent part at the Habimah National Theater, it is easy to see why a believable friendship was able to blossom on screen.

Lavie’s sweet but sharp film is a prime example of recreating a genre for contemporary audience and purposeful presentation. The tedium experienced in army camps is not breaking new ground cinematically. Even exemplary predecessors like Billy Wilder’s Stalag 17 and Altman’s MASH are not narrative originals. The reason why these efforts succeeded, though, is due to contemporary environment. Wilder had World War II, Altman with Vietnam, and Lavie with compulsory service in the Israeli army – a world not many in the West are privy to. Combined with the darkly comic and sometimes solely dark elements, the film is a classic story with contemporary romp.