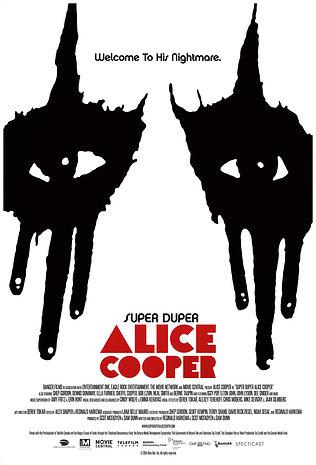 Alice Cooper’s hedonistic exploits have provided rock music with some of its funniest and most bizarre stories. The only truly surprising thing about this documentary is that no one had decided to commit those stories to film before 2014. Informative as the documentary might be, it suffers a little due to the familiarity of the story, with the only major difference between the Cooper tale and the stock rock star arc being the beginning: a lot of people will be shocked to learn that Cooper spent his youth as a wholesome, church-going son of a pastor, whose greatest crime was apparently growing his hair too long. His music might no longer incite the fear it once did, but at the time of its release it was dark as hell, certainly when compared to the Yardbirds songs that Cooper and his band obsessively covered at their outset. It’s interesting to see how such menacing, evil sounds grew out of an idyllic childhood and an appreciation of mild-mannered 60s folk groups.

After a maligned debut album, strangely released on the record label run by the infinitely less mainstream Frank Zappa, things look bleak for Cooper and his band until they manage to wrangle a support slot for John Lennon. It’s at that show that the infamous, apparently inadvertent, chicken slaughter occurs, which shrouds the group in the notoriety that launches them into the pop culture consciousness. If his music, which hasn’t aged particularly well, doesn’t ensure Cooper’s name is remembered for decades to come, his onstage theatrics will. The film really demonstrates that it’s those mock hangings and baby doll sacrifices that point to the not-so-secret secret to Cooper’s success: a belief in the power of spectacle. Not to say that his songwriting isn’t good, but forget timeless hits School’s Out, Eighteen and Billion Dollar Babies and the Cooper discography isn’t exactly oozing with memorable songs.

Of course, that success goes to Cooper’s head and it all comes to a halt once the booze catches up with him. Cooper basically serves as a walking advertisement for Budweiser and it appears that not one photograph of him in the 70s exists where he isn’t clutching a can. After a stint in rehab he decides that a cocaine addiction is more manageable, and when that starts to destroy his relationship with his wife and child he cleans up for good and, as is ever the case with these documentaries, finds joy and meaning in sobriety. Narration is provided by Cooper, his band and various friends like Elton John and Iggy Pop, but thankfully they tell it straight. Complimentary as they are, they avoid being too sickly sycophantic. It’s not really Cooper’s fault that his career was a rock ‘n’ roll cliché, but it’s that fact that keeps this documentary, fun as it is to watch, from reaching the heights of fascinating rock docs like Dig! and The Devil and Daniel Johnston.