The Believers at the Tricycle 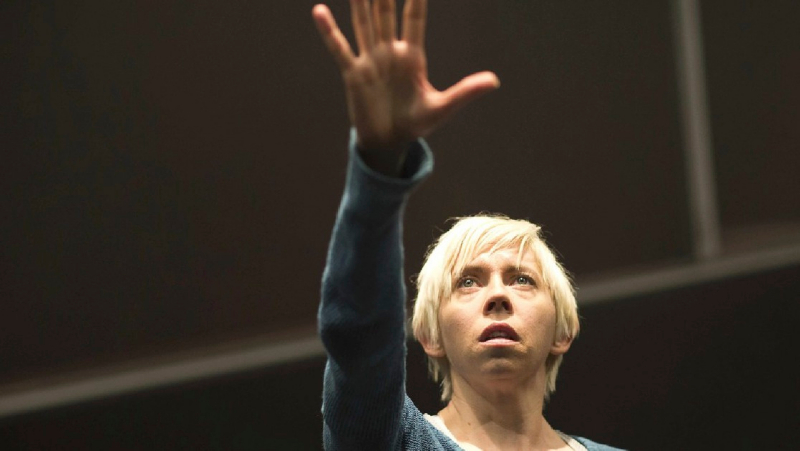 The Believers at the Tricycle | Theatre review

Angular neon strips, actors walking on walls, sharp and jolting contrasts between dark and light, between noise and silence: these are some of the spectacular elements that visionary theatre company Frantic Assembly have brought to Bryony Lavery’s poignant and distressing play The Believers. Two couples, neighbours forced together by a flood, have an awkward dinner while their daughters play upstairs. Marianne and Joff are down-to-earth: they swear and they find it difficult to control their daughter Grace. Maud and Ollie are religious and ostensibly just very nice; their daughter Joyous is a model of good behaviour. But in the midst of the stormy weather a dark tragedy unfolds.

Director Scott Graham and designer Jon Bausor have conceived of the stage space as three dimensional, framing every scene and every movement with this holistic sense of space in mind. They marry the play, perceptively written and utterly enthralling in itself, with an unflinching attachment to physicality and design. The actors gracefully weave themselves through metal frames that are spun round, turned sideways, flipped upside down or they hang horizontally from invisible wires on the black backdrop of the stage – all while delivering their lines passionately.

These metal frames, which are manipulated to form doorways and walls, are a precarious, half-formed set that both reflects the play’s driving theme – the precariousness of the lives these couples lead – and makes a statement about the nature of theatre: that what is happening on stage is only a half-formed snapshot of the reality it is representing.

Andy Purves’ stunning lighting design takes advantage of the few seconds required for the eyes to adjust to changes in light. While the audience blinks, the cast members move into new and always unexpected positions. Sudden lurches into pitch black or blinding whiteness are accompanied by ungodly sounds from sound designer Carolyn Downing. A persistent hum drones quietly throughout the action at the beginning, which is difficult to notice but penetrates deeply and sustains a slow, frightening tension.

The Believers’ most impressive quality is that none of these special effects are there for the sake of it, for a cheap thrill. They are carefully considered choices to test what a theatrical space can and should do, but always rooted by a sense of consideration for Lavery’s script and its themes. The result is absolutely thrilling.

The Believers is on at the Tricycle Theatre until 24th May 2014, for further information or to book visit here.

Watch the cast talk about the production here: