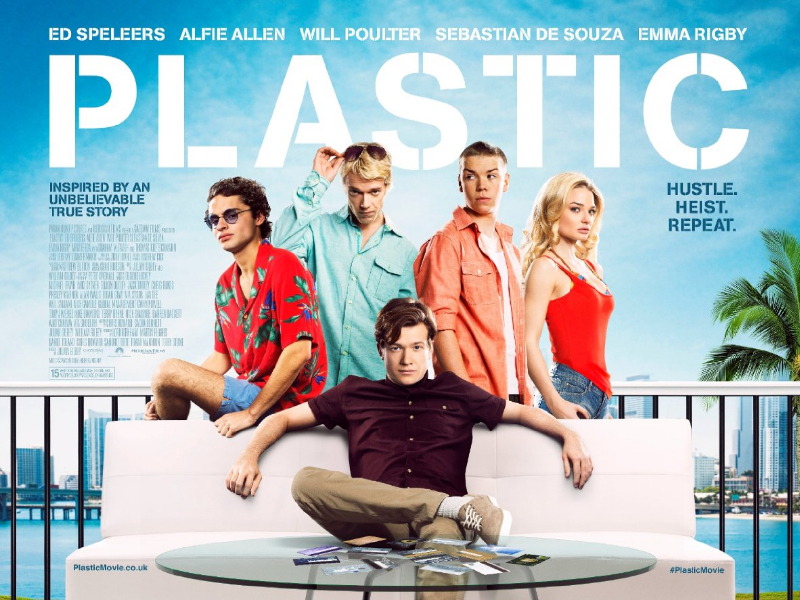 Julian Gilbey is not one for subtlety; his directorial back catalogue includes high octane thriller A Lonely Place to Die, and the brutal football hooligan tale of Rise of the Footsoldier, so it’s no surprise that his newest release, Plastic, packs a few excessive punches. In an unusual vein for a heist film, Plastic centres on a group of four British student lads who, after maxing out their student loans, have turned to credit card fraud to fund their American college style penchant for wild parties, cocaine and gambling. After a random carpark mugging goes wrong, they end up indebted to a dangerous cockney gangster type who demands £2million, or their heads on sticks. After recruiting beautiful Frankie (Emma Rigby) as both a love interest and fellow conspirator, the gang embark on a two-week dash to bring home the big bucks.

Plastic is filled with a cast of bright young talent, including Alfie Allen’s loose cannon Yatesy who, with an uncanny resemblance to Trainspotting’s Sick Boy, carries most of the films dramatics on his back. Will Poulter, winner of the Rising Star award at this year’s BAFTAs, shows his comic talent in an array of questionable disguises.

Cast aside, the issue with Plastic is the story, which takes a back seat to style, hedonism and excess. The movie reads like a tick list of action thriller staples – drugs, strippers, money, cars and guns – which the story is lazily wrapped around. The plot gathers momentum quickly: the characters transforming from naïve students to criminal masterminds a little readily perhaps (especially in Rigby’s case). But the lingering feeling is that everything is just far too easy for these students. They escalate from credit card fraud to multi-million-pound heist in a heartbeat, without encountering the kind of obstacles that would have added real depth and interest to the film, as well as stretching some wasted acting talent.

There are plenty of Inbetweeners-style jokes and action sequences to keep interest flowing. Plastic cannot be accused of being boring by any means – but a heist film, however outlandish, requires a level of realism and ingenuity that just isn’t present here. The wild coincidences and array of plot holes make what starts as an interesting take on the traditional heist into a ridiculous farce, which is just not convincing enough to go along with. In other words, Plastic is as shallow as its title suggests.

Plastic is released nationwide on 2nd May 2014.

Watch the trailer for Plastic here: