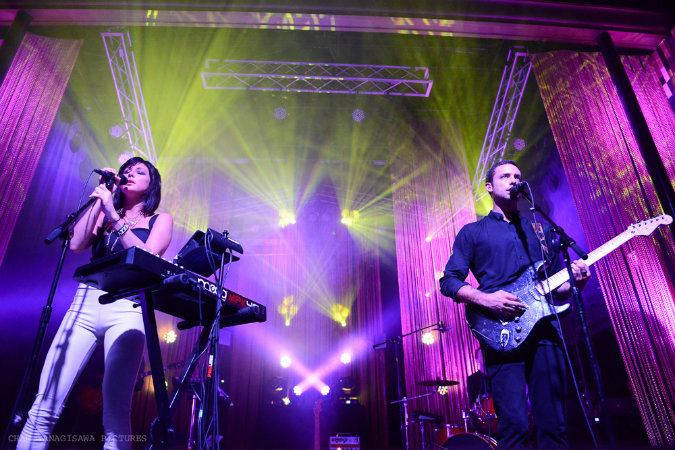 XOYO is discreetly tucked down a small side street near Old Street station, and Phantogram are eagerly anticipated as the crowds begin to gather in the atmospherically smoke-flooded basement of the venue. The enthusiastically amateur warm-up act is received well, and make up in head banging for what they lack in musical credibility – although it’s pretty clear who everyone is itching to see as the mood in the room begins to audibly hum with Phantogram’s stage time approaching. Sarah Barthel and Josh Carter waste no time or words as they appear before the sold-out crowd and immediately jump into Nothing but Trouble from Voices, released this year. Barthel steals the stage and every eye in the room instantly as she throws herself into the song with energy that seems impossible to maintain – yet her relentless immersive passion is somehow retained throughout the set. Pale and dressed in skintight black trousers, her spoken fillers between songs are endearingly awkward and modest: “We’re playing another show tomorrow night in Soho if you want to see us again” she invites the audience self-consciously towards the end of the set.

Phantogram are on stage for over an hour, but the absorbing fluidity of their set is such that even after they have played 11 songs taken from both of their albums, it feels as though only minutes have passed. Don’t Move is received with cheers from the audience, who silently pulse to the music that reverberates through the wooden floor as the duo plays. The room is captivated in a trance, bewitched by the raw energy that Carter and Barthel channel through the performance. Carter rarely takes his eyes or focus from his instrument, and his entire body shudders around it as he plays.

The diversity of the duo is demonstrated by Barthel in the encore as she takes the last segment of Celebrating Nothing, backed only by her own gentle touches upon her keyboard. Her voice, which is blunted slightly by the electronic distortion and overwhelming instrumentals in most of the songs, here is powerfully clear despite the emotion audible in each syllable. The silence of the crowd clings to her every note, and they finish off the night with a pumping instrumental; Barthel’s vocals form a wordless part of the music before the lights come on and the crowd reluctantly awaken from Phantogram’s spell.

For further information about Phantogram and future events visit here.

Watch the video for Fall in Love here: