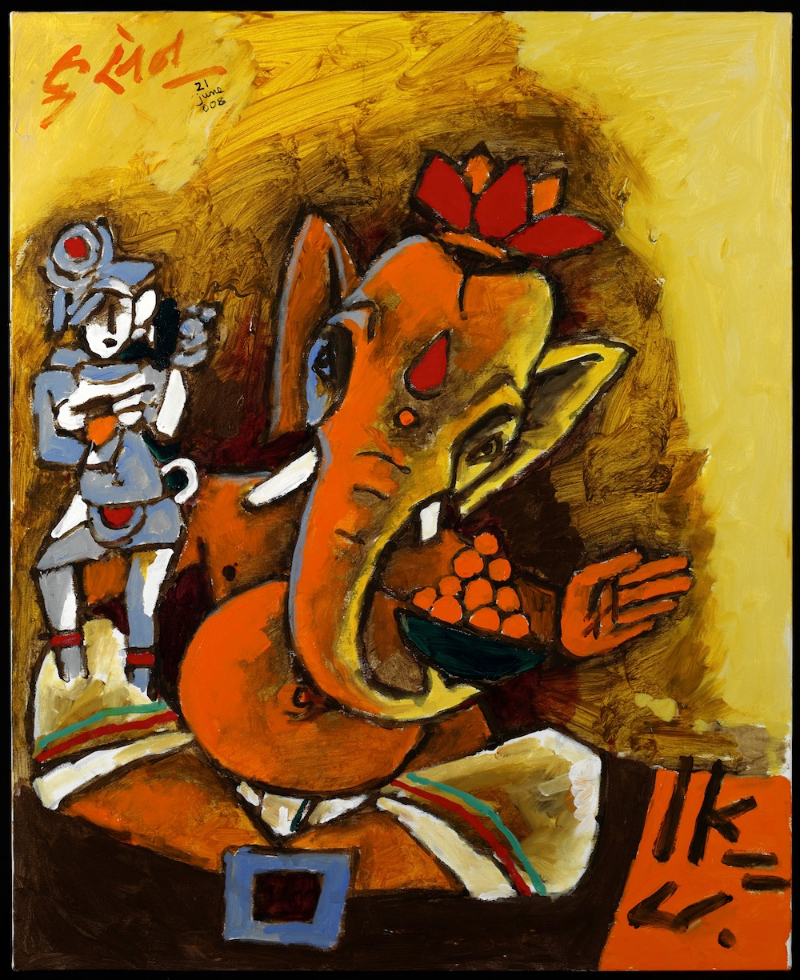 The gallery tucked into a far corner of the Victoria and Albert Museum that houses M F Husain: Master of Modern Indian Painting feels almost akin to a temple, which certainly fits with the atmosphere of these monumental paintings. However, Husain’s immersion in the history and culture of his homeland in his last years of life does not ring of nostalgic idolisation – far from it. The eight triptychs on display here exude fiery energy in a way that allows visitors to wander through the single hall of the exhibition encased in an untouchable, ferocious freeze-frame of life. 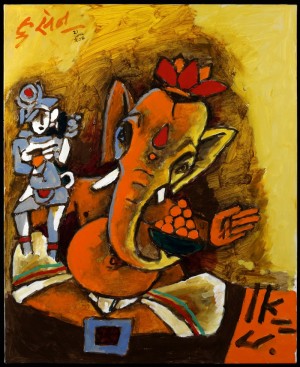 Husain began work on this series, entitled Indian Civilisation, during his last years when he had exiled himself from his native homeland. His unconventional depictions of gods had raised outrage, and his tributes to these gods even here are still unexpected – Vishnu shown without any of his expected accessories, nakedly portrayed as a facial close up in Hindu Triad. This triptych is the most violently coloured and controversially undecorated of the eight on display, with scarlet burning through the united works. This fervour and richness is carried through, with the freehand drawn thick black line work and rings of Cubism giving strength to his nickname of “the Picasso of India”. The contrast between the old and the new, the mashing together of two cultures is reoccurring – the Cubism, for a start, made to work in the context of traditional Indian culture, but also shown in the inclusion of a Rolls Royce in Modes of Transport.

The single painting standing alone to welcome visitors into the exhibition is a portrait of Ganesha – the “remover of obstacles”. It’s the most carefully painted piece in the exhibition in terms of technique and precision. There is inherent frustration felt within this work, as well as a sense of ferocious love and passion for the culture on Husain’s part – the sense of loss is tangible, and one questions whether it is merely the physical proximity to the country Husain had been disconnected with, or if he felt the culture and history of India is being changed by modern ways of life.

M F Husain: Master of Modern Indian Painting is at the Victoria and Albert Museum until 27th July 2014, for further information visit here.