The Confessions of Gordon Brown at the Ambassadors 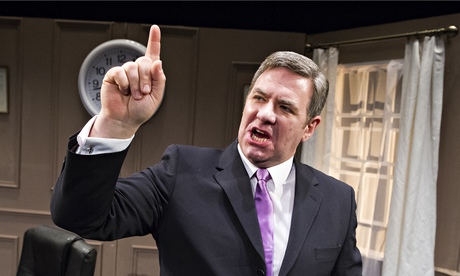 The Confessions of Gordon Brown at the Ambassadors | Theatre review 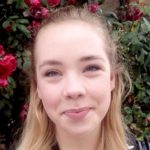 A somewhat stressed Gordon Brown enters the stage, yelling, wondering where his staff are and loudly asking why the persons who are supposed to see him for his morning meeting have not yet turned up. The scene takes place in the office belonging to the ex-prime minister, where he tells the audience how the only thing 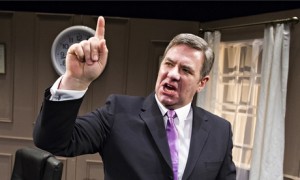 that feels right is when he hears the geese from St James’ park in the mornings – the only time when he has some peace and quiet. While the monologue unravels, the enormous clock on the wall haunts the viewer. It is the most prominent part of the scenography: all parts of the clock have stopped, except for the sweep hand that makes you uncomfortably aware of how time is passing, though the play has only been on a few minutes.

Brown’s monologue stretches over a broad spectrum of subjects. He speaks, frustrated, about what he wants to do for the people, his visions for them to all have the same opportunities, and about the hope that would create. His soliloquy critiques the EU, the middle class’ passive interest in politics and his role as a leader. He goes from showing a professional façade to a darker turn as he talks about his upbringing, the road to his position, and his loathing of and striving for power. The role of a politician and leader is analysed, as well as the altruistic reasons you may or may not have for becoming one. The hopeful outlook Brown shows in the beginning is soon swapped for frustration and violence, as he explains that leaders most of the time lead in blindness.

This is a one-man show – Ian Grieve is the man playing Brown, and it is not an easy job to keep the audience’s interest with a monologue for 90 minutes, though he gives a great performance, showcasing the light and dark of the politician’s life. It’s a witty script, but only if you are well grounded in British politics and key persons in it, since most of the jokes are based on references. When the play comes to get to an end, it doesn’t feel like anything new is given to the subject – all that is left is a tired and frustrated man, which is just a bit tedious.

The Confessions of Gordon Brown is at the Ambassadors Theatre until 30th July 2014, for further information or to book visit here.

Watch a sample of the show and an interview with the director here:

Oculus | Movie review
The Underbelly Festival 2014: A Simple Space at the Southbank Centre