Zanna Don’t! at the Landor 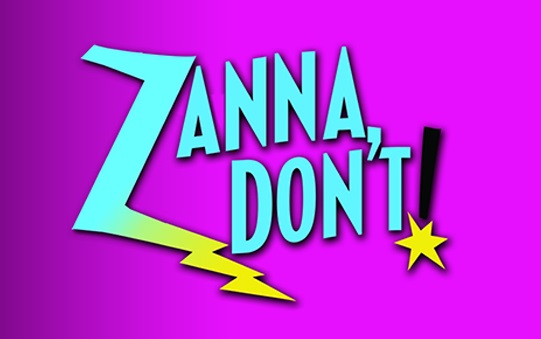 This new production of the successful Off-Broadway musical Zanna Don’t! is funny, clever and humane. Brought down a level, the small confines of the Landor Theatre bestowed an added intimacy to proceedings, and also bolstered this fast-paced two-hour production, which whizzed by without an interval. It is set in a parallel universe deep in the heartlands of middle America, where everyone is gay and heterosexuality is perceived as some strange deviation from the norm. At Heartsville High the chess champion is held in the highest regard, and it’s a place where real guys hang out at home baking brownies and watching Buffy. Actor David Ribi, who plays the lead character Zanna, gave a very energetic display, and really maintained the tempo of the first hour. But it was a great collective effort from all the actors in what was an expertly cast production, with a core group of the actors coming out of the Guildford School of Acting. The set, along with all the costumes, was decorated in a frenzy of sequins, and drenched the musical in colour.

The first half was by far the most enjoyable with the hilarity on offer. The songs Ride Em’ and Be a Man were particularly funny in their inversion of heterosexual and homosexual stereotypes. The real highlight of the musical, though, is the show within the show, as the students get together to write a controversial musical called Don’t Ask, Don’t Tell about straight people in the military – as one character remarks aghast: “If musicals are not able to challenge social conventions, then what will?” But unwantedly, the musical ends up bringing Kate and Steve together, and out of the closet. Disowned by their classmates, the heterophobia runs deep at Heartsville High.

By turning society dramatically on its head Zanna Don’t!, with its humour and vivacity, proves just how incisively musicals can actually challenge social conventions.

Zanna Don’t! is on at the Landor Theatre until 29th June 2014, for further information or to book visit here.