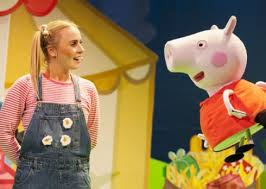 Adored by kids far and wide, Peppa Pig counts more than just a TV programme to its arsenal. Having launched in countries across the globe and opened the Peppa Pig World theme park in Hampshire, it’s now touring a third live show: one that’s as bright and upbeat as it is possible for a show to be. All the characters are puppets, except little dungareed Daisy (Emma Grace Arends) who acts as compère as she drives the show forward, inviting the audience to get involved each step of the way. The set, puppets and voices are all spot on, right down to Peppa’s trademark snort and giggle. Silly humour is not lacking, with special mention going to Daddy Pig, world champion of mud puddle jumping and proud of it. The cheerfully bright set takes us from the park, complete with tree house and castle to the classroom to the stalls and bouncy castle of the fair.

There isn’t much of a story to speak of. Instead, a collection of events see Peppa Pig and friends going about a typically fun-packed day: playing hide and seek, searching for George Pig’s toy dinosaur, meeting Polly Parrot and entering a mud jumping contest. The audience is encouraged to jump up and down to help knock the dinosaur from a tree, and to pretend to catch the ball that dangles from a stick above them. Sobbing for his lost toy, George’s squirting tears douse the front rows, a similar technique used to greater effect during the mud jumping contest. This elicits plenty of gleeful laughs from the audience, but a couple of tantrums too.

If you like songs you’ll be pleased to know that the show is chock full of them (and if you don’t, you won’t be). Rapped lyrics and a beat give Can You Hear Me? a kiddie hip hop feel, while Fun of the Fair is prettily harmonised and catchy. The finale is a medley of those two songs and the children of the audience dance with extra enthusiasm in recognition.

Although Arends’s relentless energy is impressive, the show overall is abrasively loud and could have benefitted from some calmer moments. With a 90-minute running time, the interval is necessary for small children but a pain all the same, causing a chaotic rush for snacks and merchandise for half the audience and an energy slump for the rest.

Peppa Pig’s Big Splash is at New Wimbledon Theatre until 27th July 2014, before going on tour until January 2015. For further information or to book visit here.

The Nut Job | Movie review
“What Country, Friends, Is This?” at Greenside Community Centre | Theatre review