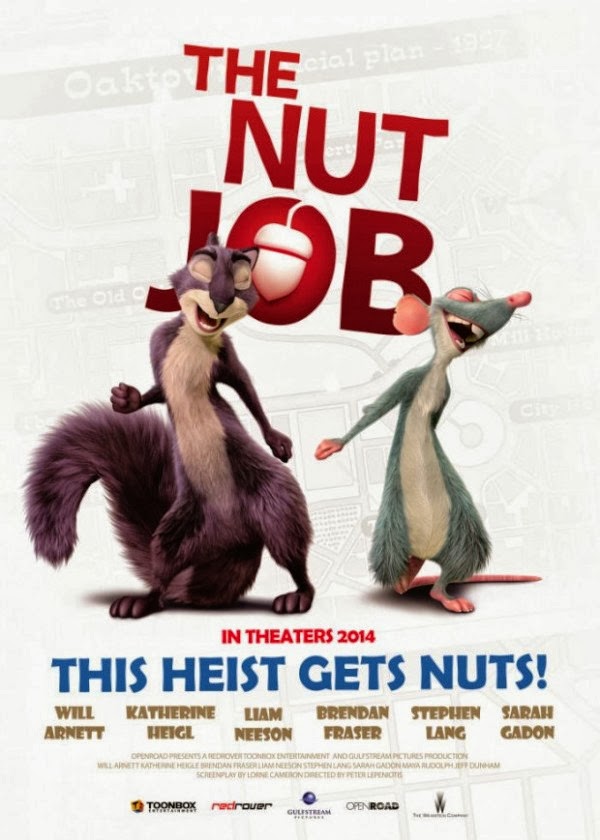 When all else fails, insert any of the following: a joke about flatulence, a re-entry of a character that you’d just about managed to wilfully forget or a nut-based pun that didn’t make anyone but uncomprehending children and mind-numbed adults laugh the first time – let alone the tenth. The Nut Job seems to be made up more or less entirely of these ploys with some admittedly pretty impressive animation as a canvas for a work of art a creatively defunct toddler could plot. Pack of forest animals have no food for the winter. Loner squirrel, Surly, has no food for the winter. Pack of animals hate loner squirrel and banish him with his unwanted sidekick Buddy – who is, incidentally, one of the most appealing characters in the whole débâcle. This is possibly because he’s mute. Moving on – Surly comes across a nut shop that happens to be run by criminals planning a bank heist, and is promptly caught up with by Andy – the bland female squirrel who spends most of the film internally conflicted and doing not very much. They arrange to work together to liberate the nuts and split the booty equally between them – unfortunately, Raccoon, the faintly sociopathic leader of the forest animals, is going to be token bad guy here and allow Surly to step in as hero of the day, which he does. Is anyone surprised?

The Nut Job is filled with characters that are either odious or so two-dimensional that not even the 3D effects that distract the viewer from the atrocity unfolding on screen can give them any substance. Surly, voiced by Will Arnett, is bitter, cocky and wholly repulsive. Even his “good guy” gestures at the end of the film are shaped by ego and martyrdom. Buddy is sweet, but is more or less there as the token sidekick. The only character who actually jumps out of the screen is Precious, the dog who sneakily colludes with the gang for the chance to lick Surly’s face at some point – she’s brought to life by Maya Rudolph and almost makes the film bearable. Almost.

The Nut Job is released nationwide on 1st August 2014.

Watch the trailer for The Nut Job here: