“What Country, Friends, Is This?” at Greenside Community Centre 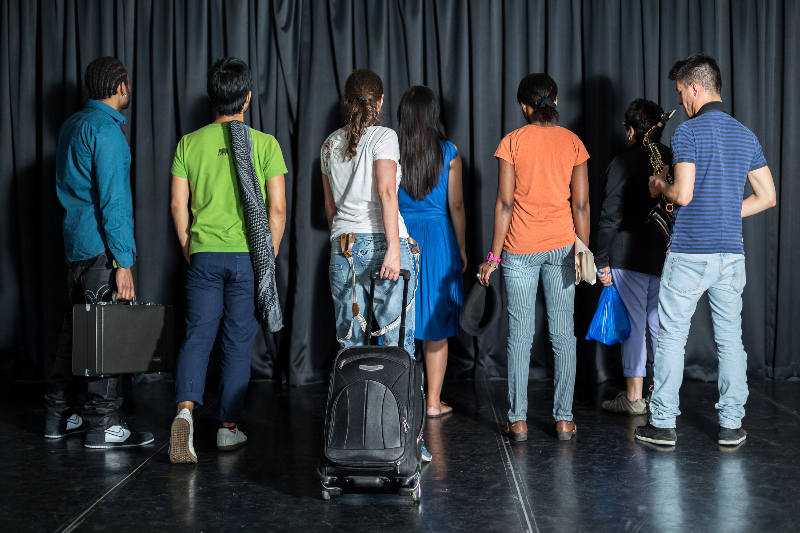 “What Country, Friends, Is This?” at Greenside Community Centre | Theatre review

“We are implicated. So are you” is written in striking, bold font on the banner held up by some of the performers for tonight’s show. It is made very clear even before the performance starts that this is a piece of “immersive theatre” that really lives up to the name: it isn’t being performed to us, but rather we, the audience, are a crucial part of the proceedings. Since October 2011, Implicated Theatre has been working on a series of workshops and performances as part of their involvement in the Serpentine Galleries’ Edgware Road Project. “What country, friends, is this?” is one such cumulation of these workshops. Based on the true experiences of members of the theatre company, tonight’s show explores migratory hope, fear and courage in an interactive format that involves the audience both physically and emotionally. The performance is put on in collaboration with Migrants Resource Centre and Justice for Domestic Workers.
The first portion of the performance is taken up mostly by the audience and company, both being coached and invited to teach the group how citizens of various cities around the world walk, and then enacting it in the “ethical space” or shared space of the evening. A lot of the activities here are initially reminiscent of the sort of exercises carried out in amateur drama groups held on a Saturday afternoon, but the intermittent monologues performed by actors in the company depicting various migratory experiences instead gives an an air of unity and sharing. The final segment sees the audience walking slowly, arms folded and eyes closed, while being guided into position by the company themselves.
This leads into the second portion: a series of physical images and scenes, most of which are open to individual character replacement by audience or company members. The changing of a single action within the loosely scripted scene is shown to make a startling difference to the outcome, with no awareness for any parties how the scene is going to turn out until it unfolds. This is true improvisation, in the context of real situations based on real migratory experiences, and the piece successfully communicates the emotion and seriousness of the matter in a disarmingly inclusive, immersing way.
★★★★★
Francesca Laidlaw

“What Country, Friends, Is This?” was on at Greenside Community Centre on 26th July 2014, for further information on Implicated Theatre visit here.