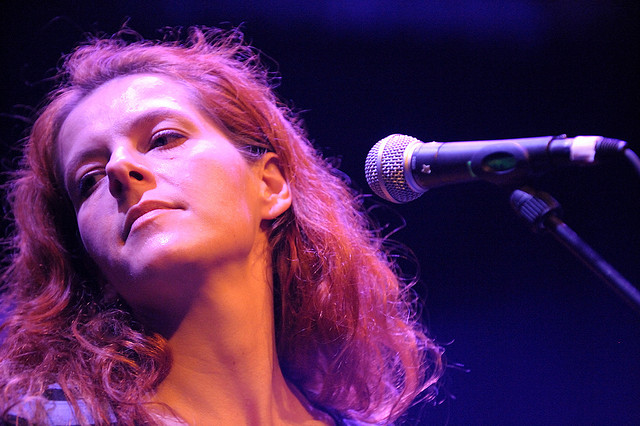 support centre and concert hall) and connecting place for people from all walks of life. Neko Case and her stunning hairdo entered the stage on Friday night, gathering a crowd who filled the church. She is surrounded by her cozy-looking band, who are slightly reminiscent of the cat musicians from Disney’s Aristocats.

Neko Case is a member of the indie rock band The New Pornographers, having released five albums to date. With her solo project under her own name, she has so far released a sum total of six albums, not to mention involvement in several other music projects. This lady sure is productive, with a huge library of music released during her career. It is thus a bit surprising that such an experienced musician’s work all sounds so similar. If you are not familiar with Case’s discography, many songs are bewilderingly homogenous. Grading of intensity between tracks is rare, which is obvious when Case and her guitarist sing a cover of Crooked Fingers’ duet Sleep All Summer at the end of the set. The simplicity in the piece and the entwining of the two singers’ voices creates a slow intensity that would have served better in the middle of the set as a contrast with the other tracks. Meanwhile, the backing singer carried the show between songs, talking and delivering jokes while Neko tuned her instruments.

It is easy to see why people are fond of Neko Case, with her unique looks and special way of mixing country music with indie and alternative rock. On high notes, her voice lifts like a swallow with the wind under its wings, and the mix of genres in her songs makes them all her own. Her performance of the night is not half bad, but that spark that ignites the feelings was not entirely there this time.