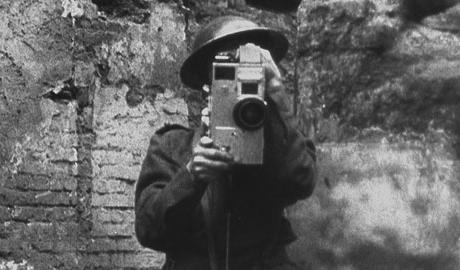 It is the April of 1945 and British troops in Europe are advancing towards one of an estimated 20,000 SS-run concentration camps in the small town of Bergen-Belsen, Northern Germany. Among the troops are a handful of newly trained soldiers armed with video cameras, entrusted with the task of filming their advancement through Germany as part of an international propaganda campaign. The atrocities they are to witness upon arrival will become the worst crimes against humanity in living memory, on a scale never seen before. It wouldn’t be long before some of the most renowned filmmakers of the era decided to get on board with the project. Together with Alfred Hitchcock, Sidney Bernstein headed the project, taking hours of endless footage and moulding it into a documentary titled German Concentration Camps Factual Survey. By recording the most horrific of the German crimes, the documentary would serve two vital purposes: firstly, to provide an apathetic America with a indisputable reason for military participation. Meanwhile, for those Germans who denied the existence of the concentration camps, the recordings served as irrefutable evidence, and indeed served as such during several of the Nuremberg trials. However, after initial support from both the British and American governments, the film was shelved after the sudden Allied victory. At a time when Germany was considered to be an important ally in the wake of the Cold War, it was felt that the release of an atrocity film would only serve to antagonise, a risk the Allies were not prepared to take. The hours of footage would remain on the shelves of the Imperial War Museum for almost 70 years. Until now.

Directed by André Singer, Night Will Fall is a documentary based on this original footage, together with eye-witness accounts and interviews with those involved in the first project. The camera lens gives an unadulterated, harrowing insight into the reality of the concentration camps and what it meant to liberate them. The underlying ideas go far beyond the initial scope of the German Concentration Camps Factual Survey; this is not a film solely about the Jewish community, but about what it means to be human, about what can happen when we allow civilisation to break down. The message is clear: if we do not look into the past to shape a better future, night will fall.

Night Will Fall is released nationwide on 19th September 2014.