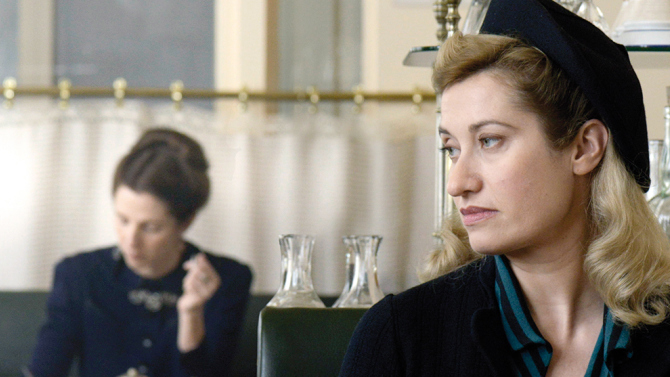 Martin Provost is writer and director of biopic Violette, about the author Violette Leduc – a woman whose life was not only doused in rejection by her parents, but also in the desertion of each person she so achingly wanted to connect with. This is not a film for the fainthearted or those averse to multiple scenes of the French countryside.

Violette, played by Emmanuelle Devos with an almost childlike serenity, has left one jail to return to a more familiar prison – her life devoid of love – but it is self-discovery that will ultimately set her free. As much as one has the urge to cradle and console the doe-eyed woman-baby, there are times (her stalking of fellow writer and future mentor Simone de Beauvoir being one) where she seems mentally too far gone: a woman destined for the set of Jeremy Kyle.

There is an air of desperation and sadness that surrounds Provost’s main character; in fact all his characters in this film have a deficiency of some kind. Nevertheless, it seems they all find refuge in literature. Provost’s ability to portray the need for art as an outlet, a lifesaver even, has been seen his previous biopic drama, Seraphine.

As much as the heartbreak of Violette’s existence would make grown men cry, Provost weaves information about our heroine’s life through conversation. We very rarely actually see her write. We live her stories much more subtly, which makes for compelling watching: every line matters in this finely crafted film.

Through effective cinematography and albeit sometimes arduous pacing with long scenes, we are given a window into Violette’s tormented soul, feeling the rejection and the slammed doors for ourselves. It is almost as though we know she has the material she needs to be a writer before she does, and Simone de Beauvoir, played by Sandrine Kiberlain, acts as our representative in this way. Themes of family, feminism and love all play their part in this rather long but stunning film. Shocking and painful truths are used to create art and pave a road for freedom for women in a socially constricting era.

There is a sense that Leduc was waiting for a mother figure to comfort and reassure her, but in the final scene, solitude and nature are where she ultimately finds solace.

Violette is released in selected cinemas on 3rd October 2014.

Watch the trailer for Violette here: