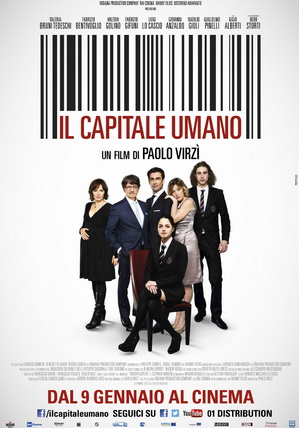 In a world where a global recession has recently proven once again that the value of businesses, of homes and even of currency itself, is ethereal and transient – but what is the effect on the commodities of the heart? What price is now on loyalty, family and love? These are the central questions in Il Capitale Umano (Human Capital), an Italian film from director Paoli Verzi. The piece will be coming to UK cinemas after having garnered acclaim both among its native audience and on the international festival circuit. While the narrative technique adopted – the portrayal of the same event, time and again, from the perspective of different characters – has long lost the lustre of innovation, it is carried off here with such precision and polish as to still feel fresh. In a study of the repercussions emanating from the scene of a brutal and tragic accident, the audience live three times through the same six months, yet each repetition remains dynamic due to excellent performances and a sumptuous and atmospheric visual artistry.

Leaping back in time from the scene of the accident, the story then unfolds toward it. Greedy estate agent Dino (Fabrizio Bentivoglio, in a noteworthy, toady turn) seeks to use his daughter’s relationship with the son of wealthy hedge fund capitalist Massmiliano (Guglielmo Pinelli) as a ladder up the socio-financial strata. The changing seasons that follow – tennis-worthy high-summer through to stark mid-winter – are shot with such scene-stealing vibrancy as to become characters themselves. The plummeting temperature perfectly echoes the decreasing value of the all-powerful fund, and a descent by those invested in it toward the hell of intrigue and criminal guilt.

Perhaps the most powerful performance here comes from Valeria Bruni Tedeschi, driving the second narrative strand as Massimiliano’s wife Carla. Her portrayal of the capitalist’s trophy, haunted by her contradictory past as an artist is compellingly well-rounded, especially considering there are just 20-minutes or so in which to tell the tale. Also worthy of mention is newcomer Matilde Gioli. Brimming with youthful spirit and the natural charisma that often accompanies beauty she makes the third chapter, and the film’s moral heart, her own as Dino’s daughter, acting on deeper and more noble motivations than monetary gain.

As a modern fable of values, and as a well-paced and engrossing film noir, Human Capital is well worth the investment of your time.