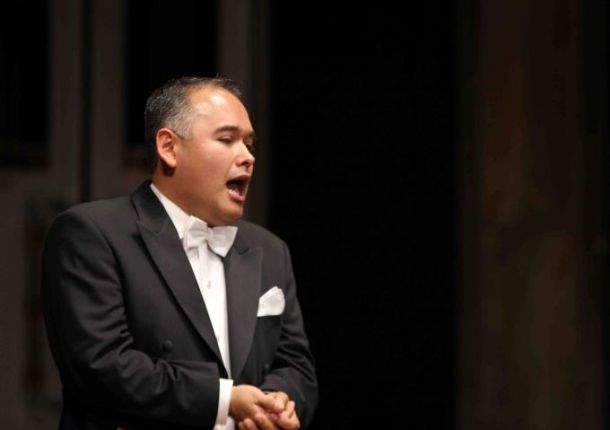 opportunities to experience truly great voices, generally only heard at the Royal Opera House or the occasional one-off concert”. 15 years after its genesis, it remains London’s only series of world-class operatic recitals, and continues to deliver on the promise to present an international line up of premium operatic talent. By quirk of fluey fate, Stephen Costello was not able to open the 2014 season as planned, but this serendipitously gave Javier Camarena the opportunity to wow a crowd on these shores for the very first time.

Wigmore Hall is a fitting venue, of a size that suits intimate recital, and with perfect acoustic resonance. One small complaint tonight is that a hanging array of microphones recording the evening for Sky Arts obscures Gerald Moira’s beautiful mural at the rear of the stage for much of the audience, but the setting remains impressive.

As if addressing the gravitas and the importance of a UK debut and opening the programme with Ich baue ganz from Mozart’s Die Entfűhrung aus dem Serail, Camarena powerfully underlines his star quality from the get-go. Accompanied by Enrico Maria Cacciari’s piano, the tenor’s voice is of such exemplary technical brilliance as to virtually defy criticism, once some minor concerns about linguistic phrasing in that first German aria give way. From there we head into a powerhouse of a performance comprised of libretto in Italian, French, and – fittingly for the constantly beaming Mexican – Spanish.

Some of the selections here are not likely to be particularly familiar to all but the most ardent opera fans (though there seem to be a good number of them in attendance). In particular, a second half with a tendency toward the more modern, and to the Americas, features a refreshing choice of compositions by Sorzabal, Lara, and Camarena’s countrywoman Maria Grever (Despidida).

Best illustrated by an encore comprising La danza, Core ‘ngrato and a triumphant Nessun dorma, Camarena’s delivery is one of class in all colours of the spectrum. Whether nailing a sledgehammer high C to rapturous applause, or leaving a quiet romantic section hanging in silent reverie, he has his audience in the palm of his hand throughout.

For further information about the Rosenblatt recital series visit here.