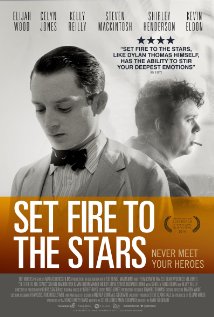 Emotionally charged and precisely executed, Set Fire to the Stars utilises subtext and poetry to go deeper into a true story. The film follows the story of John Malcolm Brinnen (Elijah Wood) as he attempts to keep the acclaimed and infamous poet Dylan Thomas (Celyn Jones) under control during his tour of America. Being black and white, and with various poetry readings punctuated throughout, this film initially gives off a distinctly artsy vibe that might be off-putting to some audiences, but the performances from Wood and Jones sustain the rhythm throughout. The story can be seen as a more substantial Get Him to the Greek, just with less rambling pontification from a drunken Englishman. In reality, this is more about the friendship between Brinnen and Thomas than the logistics of the reading tour, or the poetry itself.

Although a main feature and no doubt a tool of storytelling, Thomas’ poetry is performed more sparingly than one might expect. Rather, the interpersonal relationship between the two is used to display the demons within both of them. Wood and Jones’ performances are captivating and at some points chilling, particularly during Wood’s soliloquy-style ghost story of childhood and mortality. The supporting cast includes Steven Mackintosh, Shirley Henderson and Kevin Eldon, who give sound performances, but are outshone by the two main characters.

The landscape of rural Connecticut (although filmed almost entirely in Wales) is complemented by being in black and white, and fills the elongated pauses with breathtaking visual moments. The score also perfectly accompanies the story with its ethereal tones. Director Andy Goddard integrates these elements well, striking a perfect balance between story and character.

Even with any prior knowledge of or interest in Dylan Thomas, this film is captivating and moving. The performances of his poems are striking and poignant, and bring new meaning to well-known words. If you’re looking for a biography of the poet from his childhood to his tumultuous career, this is not the movie for you. But if you’re looking for an insight into his madness and genius, you might find this to be an interesting watch.

Set Fire to the Stars is released nationwide on 7th November 2014.

Watch the trailer for Set Fire to the Stars here:

Related Itemsmoviereviewset fire to the stars