Gogol Bordello at the Roundhouse 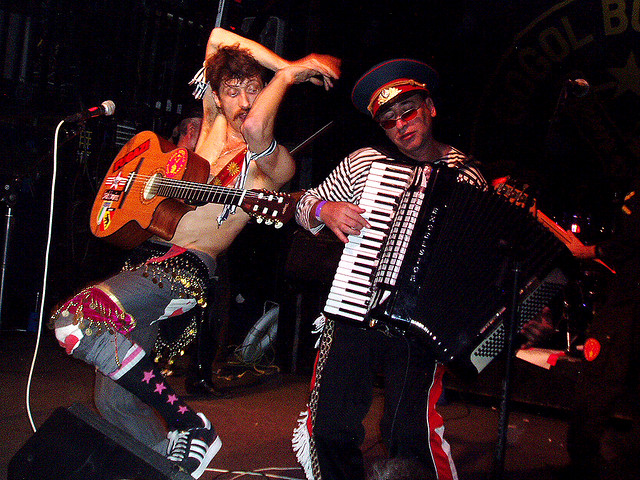 Tonight, the Roundhouse is packed. It’s a sold-out show, and Mariachi El Bronx are getting people moving. As an alter-ego of an all-American hardcore band, one might expect their foray into Mexican music to be a little inauthentic or simplified, but this is not the case. Standing before the audience is a bona fide mariachi band, and the cross between celebratory, energetic music and frontman Matt Caughthran’s onstage patter is the perfect mix to get the crowd ready for the headline act.

Mariachi El Bronx whip the crowd into a frenzy, but can Gogol Bordello – the worldwide gypsy-punk-reggae-latin-balkan-klezmer-dub collective – satisfy expectations? The answer is a resounding yes. From the moment the band take to the stage, the room ignites, and this ragtag bunch of performers hurtles through a whirlwind of songs, genres and styles. Much of the first half is comprised of material from their latest album, Pura Vida Conspiracy, and the fact that they are able to dip in and out of much older songs smoothly and naturally is testament to quite how good this new material is – even when compared with much-loved classics. As the set continues, more and more old songs make an appearance, earlier work such as Wonderlust King, Start Wearing Purple and Alcohol, along with tracks from their 2010 effort Trans-Continental Hustle – the album that propelled them from cult underground band to global phenomenon. Most notable of these tracks was the rabble-rousing Pala Tute, which had the crowd jumping so much it felt like the Roundhouse was about to collapse.

The energy pouring from the musicians is almost palpable. For the most part, frontman Eugene Hutz takes centre stage, flanked by Elizabeth Sun and Pedro Erazo – both percussionists and backing singers – and the physical movement on stage is almost like watching a circus. The speaker stacks are prone to being scaled by one or more members, and the mic stands repeatedly find themselves kicked into the audience. Despite their refusal to be tied to one genre, least of all straight rock, this is one of the most rock ‘n’ roll bands out there. Perhaps it is their diversity that makes them so appealing, as the audience demographic ranged from young to old, punks and pop-kids, all coming together to watch a band hailing from the four corners of the globe. Despite constant line-up changes, Gogol Bordello are still going strong, and they still have that unifying power that makes them so special.

Watch a live performance of My Gypsy Auto Pilot here: