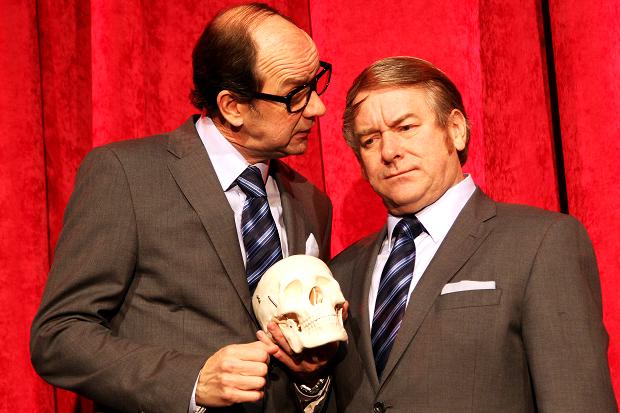 In a decade oversubscribed with crude comedy, courtesy of the likes of Dapper Laughs and Jeremy Clarkson, it’s soothing to remember the innocent humour of British double act Morecambe and Wise. Playwright/actors Ian Ashpitel and Jonty Stephens lovingly emulate the pair in this uplifting show: a compilation of some of their classic jokes and sketches. There’s excellent chemistry between Ashpitel and Jonty as they bring to life the touching friendship – comprising a healthy mix of affection and exasperation – that existed between the duo. Ashpitel has Ernie’s amiability and show-biz smoothness, not to mention the combover, down to a tee, and happens to look uncannily like Ernie Wise in face and stature. Stephens, comparatively gangling, cuts a marvellous Eric with a spot-on salt-of-the-earth Lancashire accent. His many idiosyncrasies are perfectly recreated, from the way he adjusts his glasses to the fond pats he delivers to Ernie’s face. With an irrepressible buoyancy he lets loose gag after gag.

If you’re a fan, most of the jokes will be predictable but you’ll relish watching them coming. The Grieg Piano Concerto sketch, in which Ernie insists “I’m playing all the right notes, but not necessarily in the right order” garners huge laughter, as does his commenting on the sound of a police siren, “he’s not going to sell many ice creams going at that speed.”

The first half takes place in a private hospital ward, allowing the twosome to recreate the sketches in which they sit up in bed together. The scene sees them bounce off each other, Ernie swinging between fondness for his friend and infuriation at his never “switching off”. Eric makes fun of Ernie for being tight (“have you changed the combination on your wallet?”) while Ernie moans that he doesn’t get enough credit as “the straight man”. Turning wistful, the pair muse over their time together, and the moment it came to an end, the nostalgia was disarmingly poignant.

We don’t dwell in pathos for too long, though. The second half brings down the red velvet curtains for a typical stage show. Eric performs the paper bag and invisible ball gag and there are quips a-plenty to members of the audience.

After finishing with Bring Me Sunshine, the two depart the stage by way of their famous skip. Fans and newbies alike will be able to enjoy this show, which pays homage to the glorious silliness and immortal puns of Morecambe and Wise.

Eric and Little Ern is on at St James Theatre until 11th January 2015, for further information or to book visit here.