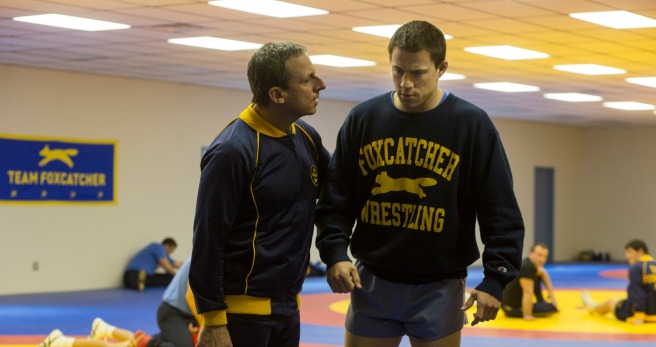 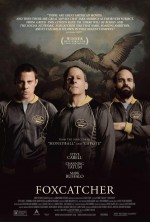 Partly because one struggles at first to recognise him through heavy naturalistic prosthetic make-up, it’s quite a surprise to realise that it’s “funny man” Carell that has been charged with responsibility for the dark heart of this dark film – but the gamble has paid off. Reminiscent of the departure that saw Robin Williams cast aside the chuckles to set the skin crawling in One Hour Photo, Carell’s revelatory portrayal of ethereally cold schemer du Pont is a million miles from The Office, or The 40-Year-Old Virgin, and fully deserving of the Oscar buzz that has come to surround it.

Though Carell sets a high standard, all three of the performances upon which Foxcatcher is largely constructed are strong. Channing Tatum gives a less-is-more study in brooding torment as disillusioned hulk Mark Schultz, the unwitting fly entering du Pont’s web, while possibly the most assured turn comes from Mark Ruffalo. With compelling charm (also displayed by Sienna Miller as his spouse), Ruffalo’s Dave Schultz embodies both a fatherly role model for his wayward brother, and the almost mythical all-American hero coveted by their unhinged benefactor. That the morally grounded lynchpin of the piece is also its ultimate victim ensures that the growing, simmering malevolence culminates in a sense of genuine tragedy.

That this film will live on in the memory is also testament to the heady atmosphere of the world in which it’s set. Scenes featuring wrestling competition are handled with authenticity, but not allowed to overshadow the emotional drive of the film (one key bout is on screen for only as long as the sounding of the buzzer that marks its end). For the most part, though, the characters bounce off each other in Bennet’s brilliant realisation of a warped tycoon’s fantasy land. The estate from which the film takes its name is a character in itself – somewhere between a Bond villain’s headquarters and the Bates Motel (with Vanessa Redgrave used sparingly but effectively as du Pont’s mother), with landscapes occasionally shot briefly through a woozy, wobbling filter, echoing the owner’s descent into madness.

Watch the trailer for Foxcatcher here: