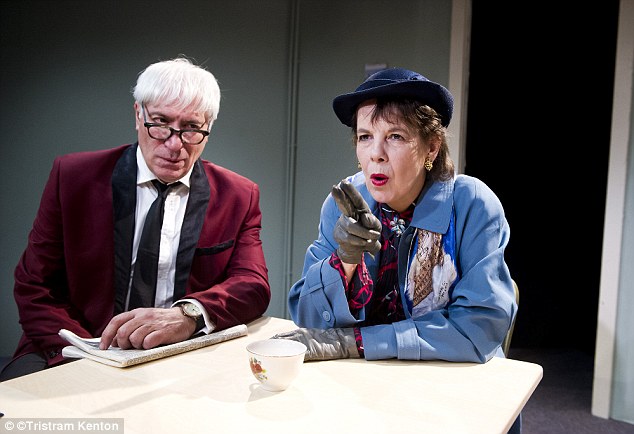 An intimate character study portrayed through kitchen sink drama, Ivy & Joan combines the mundane day-to-day with heightened emotions of pain, bitterness and remorse. Comprised of two separate but complementary plays, it serves up bite-sized episodes of two much longer stories. We meet Ivy: recently sacked from her job at a hotel cocktail bar, she is a bitter gossip. At first a laughable figure, she becomes pitiable as the play nears its end, clutching onto the hope of a long lost love. In the midst of anger at the world is a true and beautiful optimism that love will prevail, and the audience’s knowledge that it cannot is heartbreaking. Trivial details such as her “sheridan bone china” ring of Alan Bennett’s writing.

We come across Joan and her husband after an argument. Joan is similarly dissatisfied with life. A recent trip to Venice with husband Eric led her to Signore Dottore Marcello di Eduardo, whom she found inspiring but whom her husband labels a gold-digging gigalo. The dynamic shifts as power is relinquished from Joan when Eric makes a startling revelation.

Both Ivy and Joan are packed and ready to make their exits, but the path to that objective is not as simple as we’re initially led to believe. Playwright James Hogan pieces together an image of the relationships between the characters – those absent as important as those onstage – skilfully offering us crumbs of significance among the superficial chit chat.  We come to understand how each woman’s foibles make them difficult company, yet their common desire is one for love.

Ivy & Joan perfectly showcases the talents of its actors, who each slip between two very different characters. Broad Lancashire accents characterise the first performance; Queen’s English the second. Lynne Miller (The Bill, Silent Witness) employs humour, warmth and desperation as the leading ladies, and Jack Klaff (For Your Eyes Only), showing understated exasperation as the supporting male roles, has a wonderfully expressive face.

James Hogan’s lively realism conjures the quiet tragedy of a missed moment, the remorse of a life unlived and the frailty of hope against the drudgery of the relentlessly passing years.

Ivy & Joan is on at Jermyn Street Theatre until 24th January 2015, for further information or to book visit here.