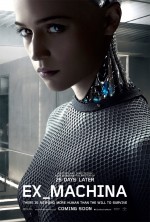 The premise is nothing too mind-blowing: Caleb, a young coder, wins a competition to spend a week with his boss Nathan, CEO of Bluebook. Upon arriving at Nathan’s “house” the real reason for Caleb’s visit is revealed; he is to play a role in Nathan’s version of the Turing test. Most will be familiar with the premise, devised by mathematician Alan Turing, to determine whether or not a machine has consciousness comparable to our own. The twist here, however, is that Caleb already knows Ava is a machine so in Nathan’s own words: “the challenge is to show you that she’s a robot and then see if you still feel she has consciousness.”

The debate over whether machines can truly ever achieve consciousness is one that has been wrestled with in science fiction for decades. This is a well-told story, but if anything these pre-existing expectations add to the experience of the film. You’ll find yourself expecting twists that keep you on the edge of your seat, whether they come is another thing entirely.

The closed-off set and the few characters give the film a claustrophobic feel, which fosters a growing feeling of paranoia, reflected onscreen through Caleb as the story unfolds. The cinematography and the score are wonderful, adding to the atmosphere. The story takes place over a week, and as time progresses things become more and more sinister and unsettling. First there is isolation, then there is Ava – so human, yet so obviously not. Things begin to heat up when Ava urges Caleb not to trust Nathan. From then that becomes the struggle: neither Ava or Nathan seem wholly trustworthy, and even Caleb seems to have a little bit of a dark side.

Ex Machina is the kind of film that is hard to shake off. It gets under your skin within the first half an hour, and though it may not be everyone’s cup of tea, it is undoubtedly one of the most well thought out sci-fi films of recent years.