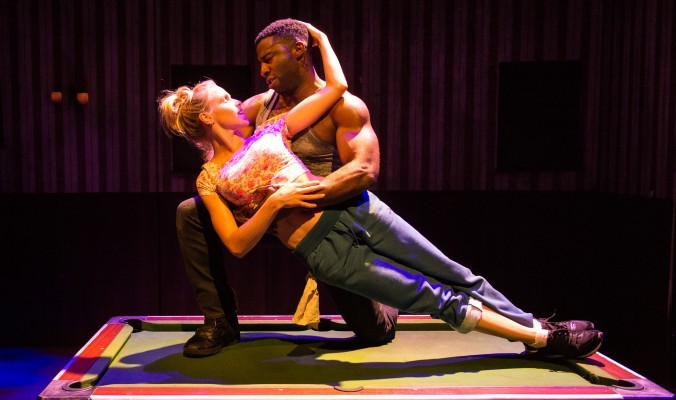 in Northern England, where a bunch of brawling, laughing, drinking chavs worship at the altar of the pool table. Brandished bottles slop beer all over the stage.

Shakespeare’s tale of lust, jealousy (Othello gives us perhaps the first usage of the phrase “green-eyed monster”) and deceit befits its boozy setting so well as to suggest it was his prophetic intention all along.

The way that the characters’ actions reverberate, affecting every other character, is neatly echoed in Frantic’s signature contact dance movements. Slow-motion and techno music that emphasise the action are employed effectively. The background teems constantly with little details aside from the main action, offering a full and complete picture of their world. The set is full of surprises, like that shape-shifting back wall: rippling during a drunken scene, widening the room as Othello seeks distance from his crime or peeling away completely to reveal the brick wall of an outside alley.

Shakespeare’s language is clear, intelligible and never feels out of place for a moment. All opportunities for humour within it are used to great effect. There’s a delicious irreverence that sees Desdemona speaking eruditely of faithfulness and love while sitting on a public toilet next to the graffiti “knob sack” and “BNP”.

The stand-out performance is Steven Miller’s as Iago, his assertive movements and excited energy incongruous with those furtive eyes. The embodiment of true villainy, he projects a scheming, rat-like quality that contrasts with Othello’s leonine stance.

Heart-wrenching and blood-boiling, the show will grip you vice-like from start to end. There’s a twisted, beautiful moment in which a murder perfectly mirrors an earlier dance of romance; Frantic apply their physical theatre to both the sublime and the horrific. Othello ends with all the bloodiness befitting of a true Shakespearean tragedy.

Othello is on at Lyric Hammersmith until 7th February 2015, for further information or to book visit here.