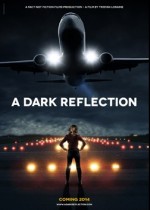 Producer/director Tristan Loraine is on a mission to raise awareness of toxic air. This is a by-product of the gases used in plane engines, which is filtered back into the interior of the aircraft in flight. It can potentially cause serious health problems, ranging from nausea to brain damage. Loraine was personally affected by this when

, at 44 and previously healthy, he was deemed physically unfit to fly due to “repeated exposures to contaminated air on commercial aircraft”. This matter has previously had some exposure, yet little action seems to have been taken in response and many are unaware of the risk. With his new-found passion for filmmaking, Loraine continues to raise awareness with his films Welcome Aboard Toxic Airlines (2007), latest release A Dark Reflection, and his next project Aerotoxic, expected in 2016.

Following an investigative reporter as she uncovers a case is a useful tool when presenting real-life issues in dramatic form. The audience is part of the investigation, piecing together information right up to the inevitable conclusion. It is possible, however, that they might also draw their own deductions, and thus the issue ought to remain on the conscience long after the film is over.

There are solid performances here from the female leads Georgina Sutcliffe as reporter Helen Eastman and Rita Ramnani as Natasha Stevens. Eastman is a mentor to Stevens, but relies on her and trusts her judgement as their professional bond develops. Nicholas Day as JASP Air owner Charles Jaspar, along with Marina Sirtis as his wife, are suitably villainous, without being exaggerated. Mark Dymond as conflicted JASP Air CEO is balanced and composed as he carries out his own investigation.

This is the last feature film to use 35 mm film stock, and it takes advantage of this effect with numerous landscape and air shots. The music is appropriately menacing and thrilling with a re-occurring track used to hint at danger, guiding the story well.

This project was a result of a huge financial collaboration between international crew unions, former and current crews, and the Aerotoxic Association, with the support of the UK film industry. It is believed to be the largest British film co-operative, with up to 1000 people contributing. This is a sign of just how important the publicising of this problem is to those involved, this project another step towards raising awareness of a worryingly neglected concern.

A Dark Reflection is released nationwide on 27th February 2015

Watch the trailer for A Dark Reflection here: