The Unremarkable Death of Marilyn Monroe at St James 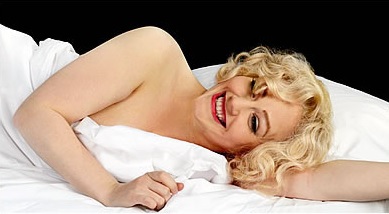 The Unremarkable Death of Marilyn Monroe is part of the Icons Season at St James Theatre, with unusual tellings of the personal lives and careers of stars such as Marlene Dietrich, Dylan Thomas, Bette Davis, Richard Burton and of course, Marilyn herself. Plays and films allow contrasting looks at the stars in their finest moments, against imaginings of their personal struggles. This is a story that writer/director Elton Townend Jones has wanted to put on for many years, a refreshingly bleak presentation of the last hour and a half of Marilyn Monroe’s life. It is a stark portrayal of her mental unravelling as she recounts the seminal moments of her life and people she has encountered – friends, lovers, family, Hollywood and the press. It depicts the emotional repercussions of insecurity, abandonment and abuse with care and sensitivity, reflecting Jones’ reverence for Monroe.

Lead Lizzie Wort carries the one-woman show with great endurance. Wort states that she has done her best not to over-research Monroe, so that she could create a human being rather than caricaturing her accent and mannerisms. She wanted to be able to inject something of herself into the character to open up interpretation of the events of her life and to explore a different side of the woman. In only a robe, dishevelled hair, and minimal make-up, this emotional expression is allowed central focus.

The play is set in Monroe’s boudoir: with a gold bedspread and autumnal lighting, this creates a sense of glamour fading into a desolate winter, a manifestation of her superficially beautiful yet isolated and psychologically imprisoned state. With the intimate invasion of her bedroom the audience takes on the role of the pestering press. They are responsible for the very thing that led to her final state, a demand to know her, to see her, to dismantle her.

The play portrays a rarely seen image of the alluring star as she dwindles into self-exploration and mental instability. Beneath it all, the question of what society does to its young stars cannot be ignored. While this emotional breakdown is fictional, the facts of Monroe’s untimely demise and decent into dependency, anxiety and depression show how easy it is to lose a shining star when they are forced to carry the unreasonable expectations of the cult of celebrity worship and its pernicious adoration.

The Unremarkable Death of Marilyn Monroe is on at St James Theatre until 18th January, for further information or to book visit here.