Alvvays and Moon King at Scala 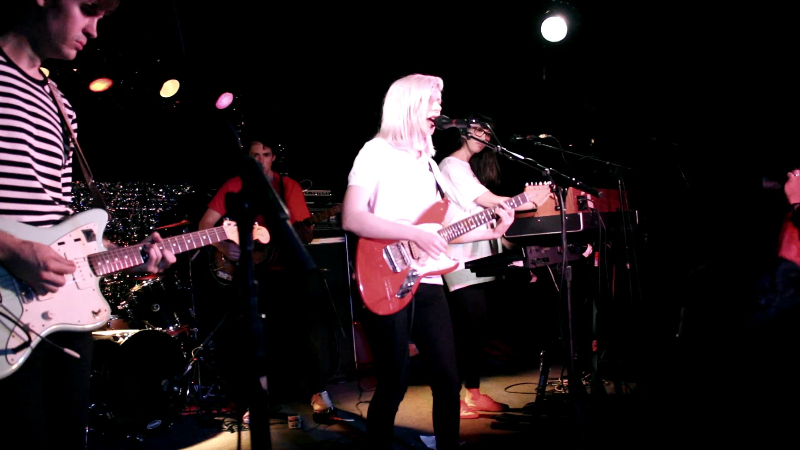 Canadian indie-pop band Alvvays released their eponymous debut album last July. Since then, they’ve clearly built up quite a following: Scala was stuffed to its labyrinthine gills last night with young couples, and music aficionados of a certain age shouting to their mates about finger picking as they weaved through the crowd. The warm-up act was Moon King, also hailing from Canada, who are indecently young. They looked like three indie rockers from school who had lassoed in a local jock (who was really good) for the drums. They have two singers in Daniel Benjamin and Maddie Wilde, both insouciantly flamboyant – Benjamin wiggling around with maracas and Wilde head-banging. They gradually won over an uninitiated but supportive crowd: heads were nodding and a bit of dancing broke out. By the time they played new single Roswell, out in April, they left the crowd impressed.

It was a male-heavy audience by the time Alvvays took to the stage. No doubt that was down to lead singer Molly Rankin, who is all platinum tresses and laid-back style, with a resonant voice that skips over the jangling, light tunes. She was confident and chatty, bantering with a rowdy crowd. She regaled us with stories of keyboardist Kerri MacLellan being accosted at Canadian customs for a crumbled-up old cookie in a plastic baggy to try to disguise an awkward interchange of guitars with Alec O’Hanley and subsequent tuning. Some of the crowd grew restive but Rankin kept them on-side with a joke: “How do you know if somebody’s a vegan? They’ll tell you.”

Alvvays took full advantage of being in an old cinema and projected some fantastic video art on the screen behind them: a kaleidoscope made from refracted old footage rather than glass and beads. It melded with their dreamy surf-pop perfectly, creating a clear aesthetic. The lightness of touch at work in their music didn’t detract from the songwriting, shown especially in catchiest singles Marry Me, Archie and the bouncing Atop A Cake. Show closer, Party Police, was a stand-out track, as was the wistful Red Planet. It was Rankin’s show, but the whole band was great together. Understated yet engaging, it was hard not to be charmed.

For further information about Alvvays and future events visit here.