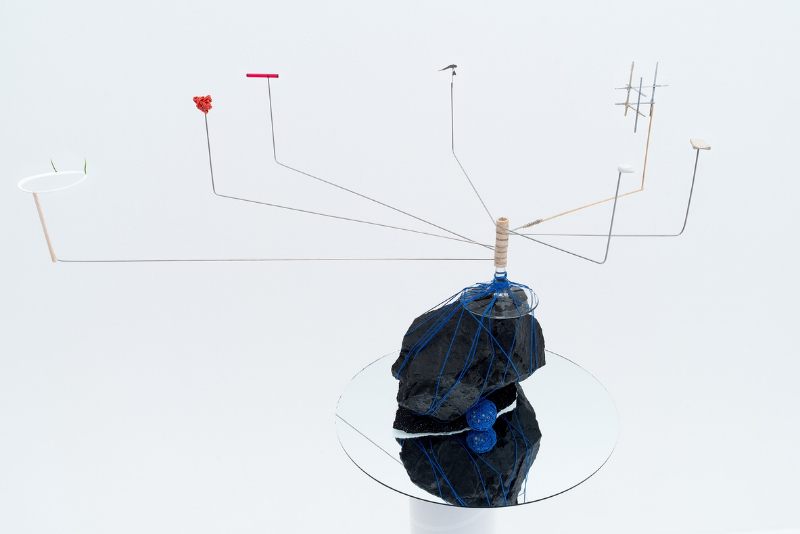 For the third time, Victoria Miro hosts a solo exhibition of sculptures by Sarah Sze, created especially for the Mayfair gallery. Sze’s sculptures create a sense of vulnerability and vitality – her work, created by everyday objects, plays with gravity and scale. The fragility of her pieces, which make up models of complex systems, serves to represent the fragility of human behaviour as a whole. Unsurprisingly, her sculptures’ names represent fragments of the human mind – Model for a Passing Thought, Model for a Suspended Sentence and Model for a Forgotten task to name but a few – all of them are traces of human behaviour.

The viewer finds new elements to each of Sze’s pieces upon closer inspection, and with that, a new meaning to her works. For instance, looking closely into the centre of the hemisphere that is a Passing Thought, one can find a carefully balanced credit card, while a pearl necklace hangs at the edge of a Poem in Rhyme. Both of them embody the impermanence of value and money – it’s in the detail where Sze’s work speaks the loudest. Familiar objects such as spoons, hearties, pebbles, pens, and bracelets have been turned into something foreign and entirely transformed. Each piece holds an unlikely surprise, a well-known old item that has found its new meaning. Thus, Sze’s sculptures showcase the effort to map, dissect and understand information, resulting in feeling of tension and futility, giving a new sense of purpose to her materials.

The second room of Victoria Miro presents a series of silkscreen prints marking a singular moment: 1st January 2014 is the common date on each of the newspapers gathered from around the globe. The newspapers are from Mexico City, New York, Santiago, Sao Paolo, and London’s Guardian – the common theme being the replacement of their first page images with depictions of the midnight sky. Coming out of the gallery, there are two more pieces displayed on its Maddox Street Windows – Model for a Last Impression and Model for a Dangling Modifier.

Based in New York, Sarah Sze is known for her large-scale installations that stretch across museums. It is for Victoria Miro that she created these small sculptures, in order to fill the gallery’s space, marking a precisely composed moment. This on its own makes this exhibition a must.