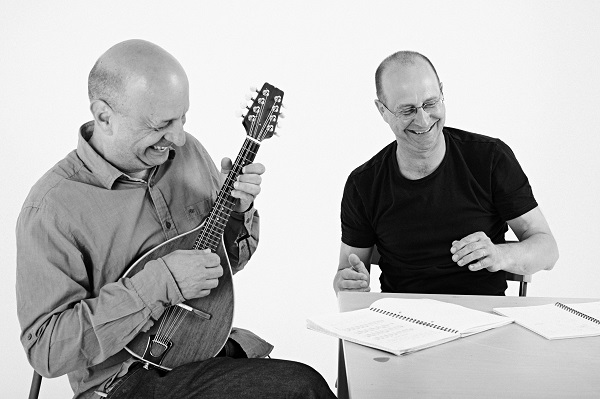 One Flute Note & Body Not Fit for Purpose

There was not an empty seat at Lilian Baylis Studio on the opening night of Jonathan Burrows’ and Matteo Fargion’s collaborative show, One Flute Note & Body Not Fit for Purpose: a one-hour production consisting of two short pieces. Both men are old hands at this and have toured the world with their collaborations; Burrows, a choreographer, and Fargion, a composer, have worked together for 25 years. Both pieces are tried and tested, though the performance itself is a bit hit and miss. One Flute Note is, according to the programme, “a mediation on memory and music”. It seems to strike a chord with some of the audience, though it’s clear from many blank faces that not everyone can connect with it. This piece is mostly sound-based, with either one man or the other on stage accompanied by various sounds or disjointed cacophonous music, but for much of the performance we are left staring at a blank stage with only the sounds to focus on. It’s funny in parts, but it’s also repetitive and drags a little so that by the time it picks up, boredom has set in and it’s difficult to focus.

The second piece is a little more accessible and far more enjoyable. Body Not Fit For Purpose is the duo’s first openly political piece and consists of short dances relating to various social and political issues. The sketches are all clearly titled to give context (possibly why this piece gleans so many more laughs). Again, it’s a little off-key, with some sketches being more relatable (A Curse on Bankers is particularly funny) and others a little obscure.

By the end of the production the audience seem equally divided: some applaud with gusto, others politely and half-heartedly. Clearly, some understood the performance on a level others didn’t. Nonetheless, it’s an interesting experience – if you feel that you can get something out of watching two men on a mostly empty stage making gestures, then this is the production for you.

One Flute Note & Body Not Fit for Purpose is on at Lilian Baylis Studio until 3rd  February 2015, for further information or to book visit here.

One Flute Note & Body Not Fit for Purpose