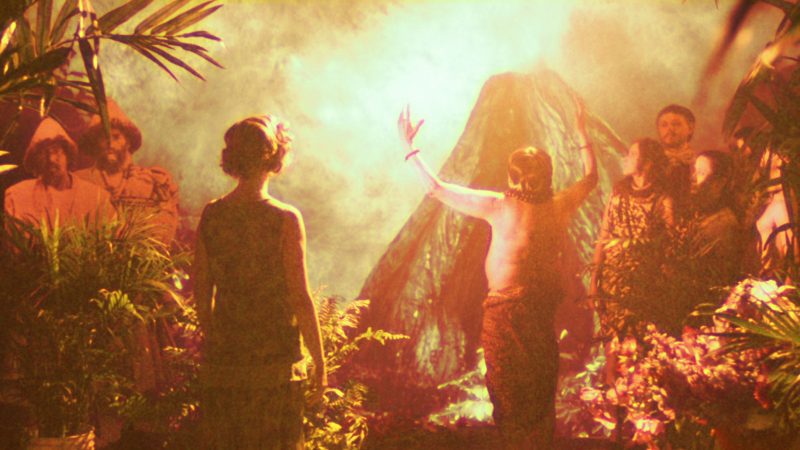 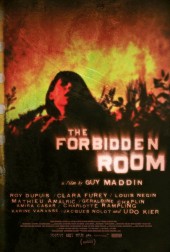 Anyone familiar with Guy Maddin’s work knows that he’s an eccentric who loves to experiment with images as well as narrative, and perhaps The Forbidden Room is his most daring experiment yet. It begins as a salty tale of four men in a very makeshift submarine who discover tons of explosive jelly in their cargo, but before they can devise a plan, a woodsman from another story (or another world) appears from the top hatch. From that story we go into the woodsman’s flashback, to the damsel in distress’s flashback, and before you know it there are myriad of kaleidoscopic stories interrupting each other and creating detours that lead us slowly away from any traditional sense of plot. Each story is told in its own idiosyncratic style: from surrealist farce, passing by twisted fairytale to absurd music videos. The use of inter-titles and reoccuring characters creates a tenuous link between each setting, allowing us to trace a faint narrative.

The aesthetic is inspired by film stock of the Silent era, which is delicate, mercurial and if you didn’t handle it right, combustible. Instead of shying away from the marks and scratches found on old film, Maddin embraces them as a tool (enhanced by software) to distort and blend images together: bubbles erupt under characters’ faces or locations, and scratches distort our sense of space. Watch Maddin and his vaudevillian troupe jump from one era, genre, setting to another is fascinating, however some of the vignettes are repetitive or too indebted to Twilight Zone. The fervent shape-shifting of the screen and the meandering story lines, each piling on the last, compound to create a very unstable, exciting world that entices the viewer to venture deeper and deeper into the rabbit hole.

The Forbidden Room does not yet have a UK release date.

Watch a teaser for The Forbidden Room here:

The Forbidden Room — a living poster from Guy Maddin on Vimeo.