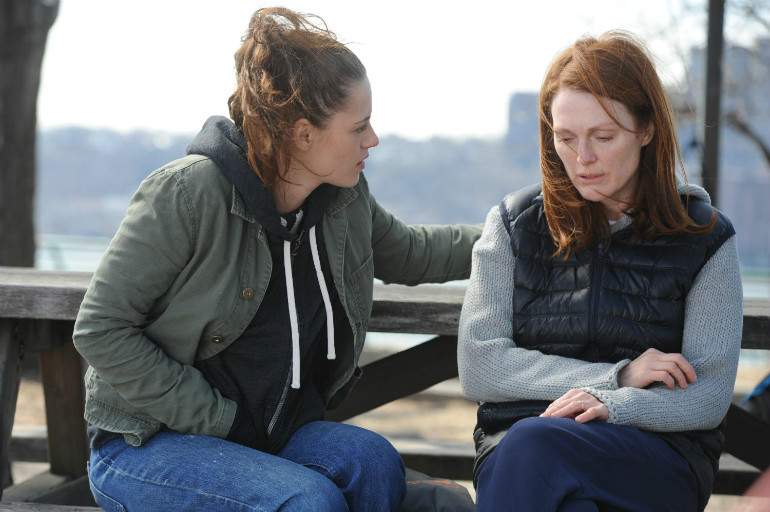 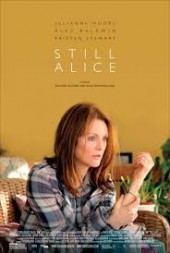 Alice Howland (Julianne Moore) is living the American dream. She has an apartment in New York on the Upper West Side and a house at the beach. She has three beautiful children: Anna (Kate Bosworth), Tom (Hunter Parrish), and Lydia (Kristen Stewart). She loves her job as professor of linguistics and is happily married to John (Alec Baldwin), who has an equally academic career. But there is an intruder nesting in among this perfectly constructed world. After a series of memory lapses, Alice is diagnosed with early on-set Alzheimer’s disease at the age of 50. Still Alice follows a straight trajectory of “the art of losing”, through the eyes of a woman struggling to retain her identity. There is no easy way out for Moore as Richard Glatzer and Wash Westmoreland’s direction tightly closes in on her throughout the film. As her reality begins to slip away, the people on screen quite literally dissipate into indistinguishable colours, leaving Alice in the forefront. Glazer’s and Westmoreland’s camerawork demands an expressive performance from Moore – and she delivers.

With nuance, Moore gradually captures how it feels for a person coping with cognitive decline. Alice, who sees her intellect as a definitive part of her identity, tries to remember words by doing brain exercises, but as her memory deteriorates so too do her many methods. It is the subtlety in the way that Moore visually expresses these changes that is most powerful. Even her tone slowly becomes detached as she articulates each word in the vein of an actress trying to remember her lines.

The problem with this adaptation of Lisa Genova’s 2007 novel, is that it may be too glossy. There are hardly any moments that show the physically ugly side of the disease, albeit one scene in which Alice wets herself because she can’t remember where the toilet is. The irony that Alice is a professor of linguistics is unnecessary. The emphasis on this slightly cheapens the story, as it seems to place a higher significance on those who are professionals. While Bosworth, Parrish and the wooden Baldwin add little to the narrative, thankfully Stewart’s authenticity as a struggling actor breaks through the family artifice. Her relationship with Moore is one of the strongest points of the film.

Still Alice shines a rose-tinted light on one of the worst neurological disorders, but at least it gives some form of awareness to such a horrific condition. For this it is worthy of recognition.

El Patron in Putney launches with Mexican-inspired cocktails
Anne Howeson: Present in the Past at Collyer Bristow Gallery | Exhibition review