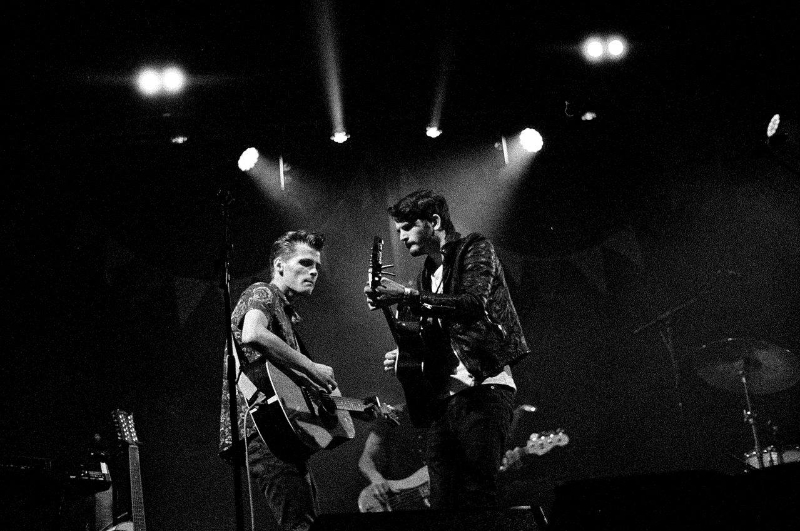 Roughly a year ago, Hudson Taylor played their first London gig. “It was in Farringdon, in front of 20 people!” exclaims an emotional Harry, brother to Alfie, who both make up the Irish-born Hudson Taylor duo. Now they’re playing for 2,000, their largest gig yet. As with most duos, Hudson Taylor have a backing band to complete the live sound. The bassist, drummer and keyboardist are greeted warmly by the crowd, but their cheers are quickly engulfed by adolescent screams as Harry and Alfie arrive on stage. If this Valentine’s Day, middle-aged men up and down the country are being dragged to watch 50 Shades of Grey, you can imagine that plenty of young men will have been brought along to Shepherd’s Bush tonight to watch Hudson Taylor.

A predominantly female fan base usually hints at a sub-par boyband with no artistic input of their own, but Hudson Taylor couldn’t be further from that. Their own brand of folk is clearly rooted in an early John Lennon teddy boy sound with Kings of Leon electric guitar overtones and melodic riffs. Even the way they dress – one in a rolled up, white sleeve shirt with slicked back hair, the other with tousled locks and a denim jacket flung over a checkered shirt – embodies it.

As the gig begins to settle into a typical rhythm, the backing band leaves the stage. Harry and Alfie ask for complete silence from the audience, and they dutifully respond by shushing each other into a noiseless fever. What comes next is an amazingly impressive display, a goosebump-inducing rendition of Arrive – completely unplugged. Without the use of anything but the acoustic guitar, voices full of passion and a crowd willing to give the spectacle their full attention, it’s a display of complete confidence and an ode to when they began their career busking on the street.

Hudson Taylor’s setlist has some really strong, stand-out tracks. Second Best has the audience singing even before the pair begin – a song for disillusioned youth that clearly resonates with the crowd. Weapons equally has the audience belting the chorus out with much gusto. Battles, arguably their biggest hit to date, closes the 19-song show. It shows that in a set with, unfortunately, a fair few filler songs, Harry and Alfie can still write a rousing chorus.

Hudson Taylor are a young act, and in terms of songwriting their maturity will weed out any filler as time goes on. If their choruses continue to grow then so will their fan base. A full headline set may have been just a little too long for their back catalogue of songs, but that doesn’t take anything away from their tremendous stage presence and awareness of their own musical abilities.

Watch the video for Battles here: