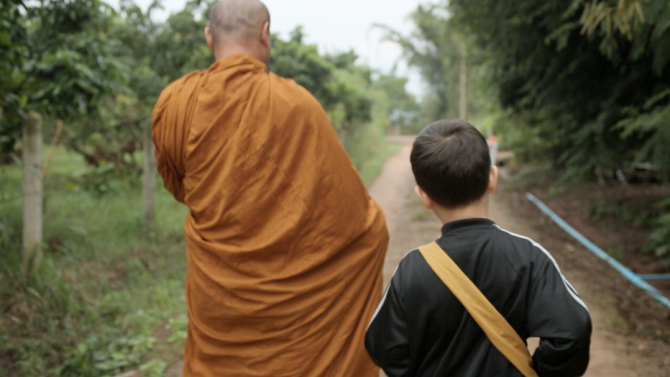 So Be It is the latest film from Kongdej Jaturanrasamee (Sayew, P0-47) following the lives of two young boys, seven-year-old William and ten-year-old Bundit. The viewer is treated to an eye-opening exploration of the different ways Buddhism influences Thai society. The two boys couldn’t be more different. William, a cheeky Thai-American boy, surprises his parents by taking part in a reality TV show where he’s ordained as a monk. To William, it’s all good fun, but unfortunately taking part in the show has lasting effects. Back at home he’s now the religious leader of his school and he’s gained more than a few admirers. William struggles with whether or not he truly wants to be a monk and spends his summer visiting his old teacher at the temple.

For Bundit though, his relationship with Buddhism is much more complex. A stubborn boy from a rural background, he was sent by his parents to live and study at a temple in Ang Thong Province for a chance at a better life. Bundit is a trouble-maker, often skipping classes and refusing to sleep in the dorm rooms. We’re told that if he continues to disobey he’ll be forced to become a monk. Bundit’s summer is spent at home, and it’s his arrival there that marks the first real smile we see from him.

Buddhism means two very different things for the boys; for William it’s a choice, an opportunity to seek enlightenment, for Bundit it’s his best shot at a life. Though the first few minutes, taken straight from the reality TV show (complete with bright colours and loud, bouncy music), can be a little jarring if you don’t know what you’re in for, the rest of the film is a poignant illustration of the differences between these two boy’s lives, and the disparity between the wealthy and the poor. The cinematography is beautiful, with many a breathtaking shot of the Thai countryside. The attention to detail is exquisite.

So Be It is definitely a thought-provoking work, leaving the audience pondering whether or not the two boys’ decisions to become monks were really theirs.

So Be It does not yet have a UK release date.

Watch the trailer for So Be It here:

Related Itemsberlinale 2015so be it