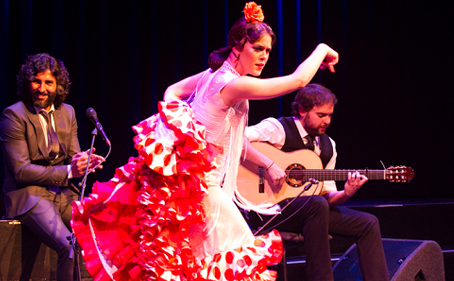 Olor a Tierra is the latest project from Huelva flamenco vocalist Arcángel (Francisco José Arcángel Ramos), met with a standing ovation from the audience. This was a performance for Flamenco Festival London that consisted of truly sensational talent. The elements that characterise flamenco are here a guitar, a voice and a body in motion, but Olar a Tierra subtly transcends these borders, broadening the spectrum of the flamenco youth movement even further. The melodic voice of Arcángel haunts the dark auditorium as the production starts. We see his shadow move on stage, and only when we become familiar with his voice are we allowed to see the man. Each musical accompaniment (guitar, percussion and compás) emerges at different times, allowing us to get to know the musicians individually. Arcángel’s creative interpretations of the traditional cante jondo repertoire have an Arabic energy to them. His voice is so beautiful and so strong that we forget we are sitting in Sadler’s Wells; instead, we are spectators in an exotic country watching an ethereal performer sing about loss and love. We don’t need to know Spanish to understand the emotion behind the words.

The gossamer refinement of Arcángel’s vocals is perfectly matched by guitarists Dani de Morón and Miguel Ángel Cortés. In a solo, the two guitars manage to entrance us into a state of pure relaxation, but the artists on stage are constantly rearranging their set-ups so we never get too comfortable. When we do, something unexpected happens – like dancer Patricia Guerrero walking on stage mid-song in an array of different dresses. Guerrero (winner of the Premio el Desplante dance award) accompanies the music on three different occasions. Her dances are either slow and sensual or furiously passionate, but each time she embodies Arcángel’s words, creating a visual story with her body. The sound of her heels mesmerises the audience as she moves around with awe-inspiring speed.

Olor a Tierra leaves you with a feeling that is hard to shake off. One word: incredible.

Arcángel with Patricia Guerrero was a one-off show at Sadler’s Wells on 19th February 2015. Flamenco Festival London is on at Sadler’s Wells until 1st March 2015, for further information or to book visit here.