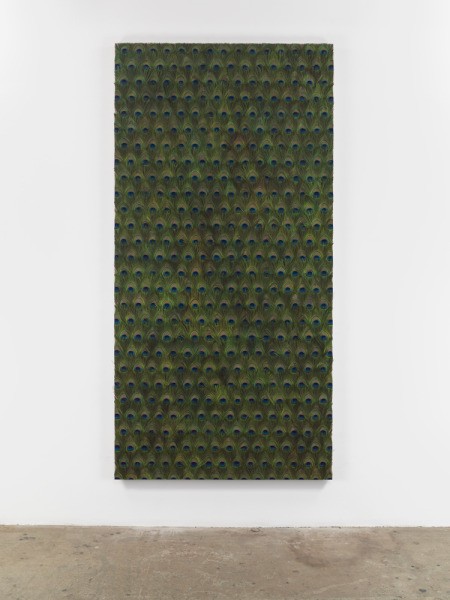 For her first exhibition at David Zwirner, Carol Bove has chosen to present a group of large-scale sculptures, made from natural and industrial material. A symbiosis of found and created objects, they have all been carefully arranged on the three floors of the gallery, so that there are exactly four works in each room. They are placed in such a way that they are allowed to correspond with one another, and with the space that they occupy. It is in the context of this notion that The Plastic Unit finds its strongest point; the exhibition is made unique by its experimentation with space. For instance, the very first room is separated into two halves by a large steel net that hangs from the ceiling, trailing all the way down to the floor (Second Cartesian Sculpture). This transparent border allows the viewer to find a different meaning to the other works in the room, depending on his position in relation to the net. On one side of it is Lingam, a combination of petrified wood and steel, of natural and modern material. On the other side sits Noodle, a stainless steel object that carries a stronger contemporary feeling. Then, in the second half of the room, there is a concrete pedestal with brass cubes: I, quartz pyx, who fling muck beds. All of the sculptures are laid directly on the floor, allowing the viewer to walk amongst them. This accommodates the full development of Bove’s idea to emphasise the shifting of meaning and arbitrary interpretations.

The first room can be seen mirrored on the floor directly above it, where the space is divided by a similar object: a sterling silver curtain consisting of thousands of small beads, creating a pattern of triangles (Triangles). Since this curtain is gentler and less pronounced than the steel one, it creates a completely different sense of the room and the objects placed throughout it. As the shiny small beads play with the eye, they also play with the viewer’s perception of the works, allowing each individual to find their own meaning within them.

Finally, the third floor consists of four linen canvases, covered with peacock feathers. This is an impressive piece, drawing the gaze to its blurred borders, and providing the sense of a perpetual timeline. As an exhibition that explores space, perpetuity, and the continuous shifting of connotations and emotions, The Plastic Unit succeeds in conveying both feelings of eternity and of change.

The Plastic Unit is at David Zwirner Gallery from 14th April until 30th May 2015, for further information or to book visit here.