Light Shining on Buckinghamshire at the National 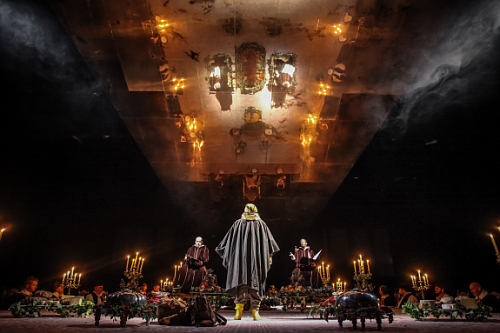 Light Shining on Buckinghamshire at the National | Theatre review

Written in the 1970s during fierce and unrelenting protest by the Unions in the wake of conservative austerity, Light Shining on Buckinghamshire captures the uprising of far-left minority the Ranters, so called because of their outspoken ideologies against the Cavalier rule of King Charles I. Though a relatively niche, little-known portion of history, the play provides a compelling narrative of one of the most important attempts at revolution by the have-nots, which, even presented richly in period dress, feels uncomfortably close to home today.

Told in a series of scenes that become vignettes of debate, the play depicts the origins of rebellion amongst the disenchanted poor and decommissioned servicemen, striving for an equal right to vote and own the land they till throughout the play. The production centres around hearty and increasingly anguished debates as the populace try to find a unified voice amongst their continuous trials. The cast are without exception highly energised and master the complexity of the discussion, aided by Churchill’s ability to debate complex subjects in plain English. What could have been a dry subject was saved by the pacey direction and literally elevated by Es Devlin’s spectacular set design. Devlin is a standout theatre designer and her creation of a vast Alice in Wonderland-scale dinner table, lurching down to the footlights, was not only a dynamic sight but a powerful symbol. As the rebels form their revolution, they do so walking amongst giant decadent dishes and flagons that are consumed steadily by Charles and his court, sat around the edge of the stage throughout the first Acts. The increasingly desperate poor literally become meat and pickings for the silent majority who do not rise to comment throughout.

Caryl Churchill is renowned for tackling topical subjects and this is a fascinating lesser-known work from the beloved writer of Top Girls and most recently Love and Information. Theatre is involving itself more politically. This production of Light Shining on Buckinghamshire places the hard questions of what can remain and thrive in the gulf left after governing authorities are toppled firmly in the lap of us as citizens, not just audience, as the 2015 election looms.

Light Shining on Buckinghamshire is on at the National Theatre from 23rd May until 22nd June 2015, for further information or to book visit here.