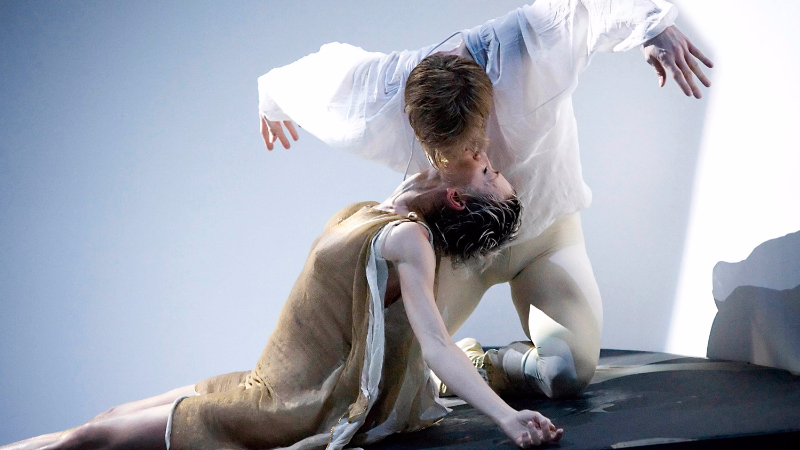 The story of Romeo and Juliet has been told hundreds, if not thousands of times: now it is the turn of Jean-Christophe Maillot to tell it. Maillot was a notable ballet soloist until an unfortunate accident prevented him from dancing further. He took this setback as a chance to further study dance – in particular the choreography. He first toured his take on Romeo and Juliet in 1996, as part of his Ballet de Monte-Carlo Company, later taking on other notable titles, such as Cinderella (1999) and Faust (2007). To open the ballet, Friar Laurence (Alexis Oliveira), stands a forlorn figure with his two acolytes (Julien Guerin & Daniele Delvecchio). His despair at the feuding families is sounded out by a loud jarring in the music, followed by a contemplative tune that ponders his thoughts. The minimalistic but strikingly open set design comes at the courtesy of Ernest Pignon-Ernest; strong whites allow the lighting to impose on the decor. It moves too, and is extremely impressive in the way it creates a rising balcony – used in the famous balcony scene.

Before that, there is the matter of George Oliveira’s portrayal of Mercutio, who is playful in his steps, and cheeky in his interactions with the other dancers. As Mercutio dances with The Nurse (Maude Sabourin), his suggestive hands on her chest build to the first laugh of the evening. As the balcony rises, so does the audience’s expectancy; everyone knows a kiss is coming – but how long must they wait?! After some showboating from Romeo (Lucien Postlewaite) the enamoured Juliet (Noelani Pantastico) is finally drawn down from her balcony to frolic. Then, they kiss.

Romeo is now full of love and Lucien’s bountiful moves express a man’s feelings in a way words rarely can. During this street scene, there is a puppet show, which the two families sit together to watch. The puppets mirror the fight that ultimately takes Mercutio and Tybalt’s lives, neither aware of the tragedy about to befall them. As the music grows in stature, so does the tension on stage: A slow motion scene follows Mercutio’s death, showing Romeo chasing Tybalt. All of the dancers slow their tempo accordingly, depicting a rhythmic street fight: a fantastic inclusion by Maillot, as choreographing this scene at full speed would subtract from its nuance.

Noelani gives a fantastic performance as Juliet, and her solo moment highlights why she is in this lead role. Her facial expressions alone sum up the despair that Juliet experiences, and there is also a subtly sexual side to her character. Noelani gives careful flirtatious flicks to her costume that entice Romeo, and the audience. There is very little that lets the audience down in this production, the only grudge is the dragging length of the final two scenes. This is unfortunate, but doesn’t take a great deal of shine off the overall ballet. Viewers are no doubt familiar with the story, nevertheless are encouraged to see it retold in Maillot’s majestic show.

Roméo et Juliette is on at the London Coliseum from 23rd until 25th April 2015, for further information or to book visit here.