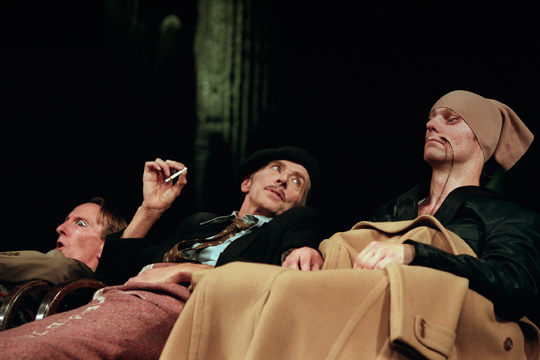 Premiering in the UK almost 30 years since it was first produced, Ahnen is a fine display of the wonders of the imagination, devised by choreographer and creative director Pina Bausch. A sterile landscape of tall cacti provides a backdrop that’s totally unrelated to any of the action – the ideal neutral ground where Bausch’s dream-like conceptions can come to life. At times evocative of a Dalí painting in motion, Ahnen combines dance, theatre, mime elements and a good dose of comedy. The whole is presented with cinematographic aesthetics, making the scenes seem like manifestations of the unconscious.

In Fellinian style, the audience is met with exquisitely picturesque and completely random snippets of action. A woman scrubs a bar of soap into powder as she sits meditatively on a chair, holding a candle between her thighs. A man leans on a cactus with what appears to be a Native American headdress but which, upon closer inspection, turns out to be a tutu. A trio of older men on deckchairs provide humour as one sings his own rendition of a Carmen song while his neighbour offers its literal translation to the third man, who is totally uninterested. In the background, among many other things, a woman builds a wall of bricks, and another is wheeled around as she floats in a water tank.

The characters appear on stage like hallucinations, making smooth entrances and seamless exits. Each transition is carried out with superb precision so that the surreal episodes seem to melt into each other. Human behaviour is caricaturised by singling out and magnifying samples of it: routines, fixations, small talk, tantrums and amusements all appear comically bizarre when taken out of context. Seeing life in fragments exposes its absurdity, and the fact that each character is immersed in an activity and so fully absorbed by it seems to reflect people’s narrow vision and their lack of awareness of the broader picture.

The spectators’ experience of Ahnen is akin to that of a child watching a cartoon. For the whole duration of the show, the audience is in a trance, mesmerised by the visual stimuli. It’s fascinating to see that the smallest amount of data is enough to engross one in the action, even in the absence of a linear storyline. The repetition of motifs provides the only structure, but since the piece is so visually appealing, it strikes a chord even when meaning is left out of the equation, because it forms a rawer connection through the senses and thus affects one on a subliminal level. The abstract world created by Bausch leaves such a captivating impression that it’s likely to delight audiences for many more years to come.

Ahnen is on at Sadler’s Wells until 26th April 2015, for further information or to book visit here.