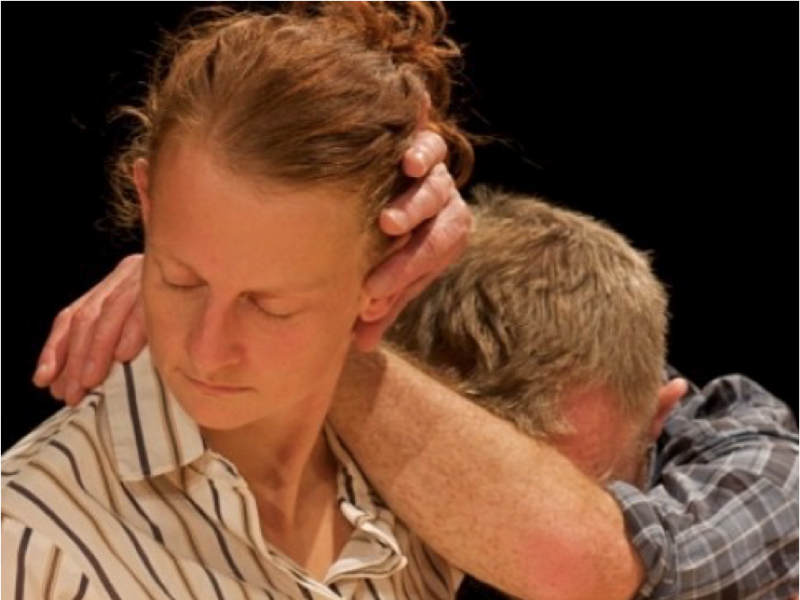 When looking at dance from a philosophical perspective, improvisation is arguably one of the most exciting aspects to be explored. Far from being random, the dance movements that the body performs instinctively stem directly from an individual’s psyche and can be likened to a series of personal thoughts translated into physical action. Katye Coe’s Preparation forms part of the Wild Card series and consists of a duet with Charlie Morrissey, performed under the vigilance of philosopher Alva Noë and artist Graeme Miller, who occasionally intervene to pose questions and steer the audience’s focus. The piece explores the link between two fundamental components of dance: improvisation and collaboration. Improvisation is a flow of instantaneous decision-making. It amounts to true expression because there is no room for constraint, editing or perfectionism; it’s a direct shift from instinct to action. The collaborative nature of duetting allows a further exploration of movement that takes into account the energy of another individual. The dancers adapt to each other’s rhythm and work together as one unit. When improvisation and interaction are mixed together, the result is an authentic dialogue that forms a transient bond between dancers that can surpass verbal communication, which can often be contaminated by endless connotations leading to misunderstandings.

The dancers in the show are left to play with movement in total silence, their pace slowing down and picking up as dictated by an instinctive understanding which, in the absence of music, orchestrates their performance. Left to its own devices, the dancing body knows what to do intuitively. When the body is set free it paves out spontaneous routes through space, whereas choreography, or pre-planned movement, can restrain the body, as it forces it to adhere to an imposed structure dictated from an outside source, be it another’s mind or one’s own mind at a different time and thus in a different state.

Preparation is an audaciously playful experiment that doesn’t seek approval and only aims to unfold itself, without striving to entertain. Noë suggests that in a world where people are overburdened with stimuli, the performing arts can still put viewers into a state of mind that forces them to focus harder and really see what’s in front of them. The piece is an invitation to value dance as one values dialogue, to watch a physical conversation develop, and learn to read emotions and decipher thoughts told through movement. The same dynamics that apply to verbal communication can be seen in dance, and if the audience learn to detect the personal voice of each dancer, their appreciation of a performance would increase significantly.