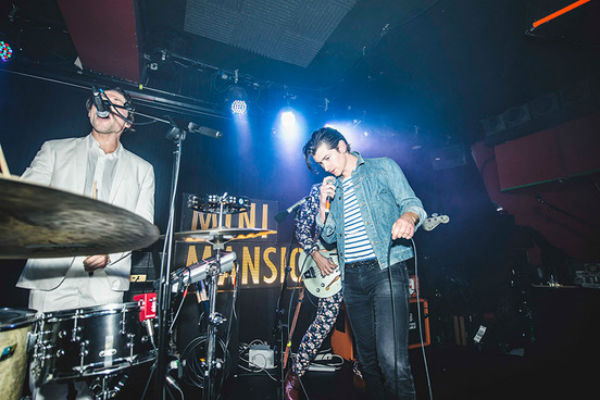 Mini Mansions offer up a highly versatile sound that brings together a range of styles from gritty rock to synth waves to hints of The Beatles. The band bring it all together in a way that is fluid and complementary, displaying a range of different skills and tastes while still sounding individual and fresh. They are a close-knit trio, who have developed something unique that still alludes to the variety of musical influences that brought them together.

Formed by Queens of the Stone Age bassist Michael Shuman, the band also consists of Zach Dawes and Tyler Parkford. Shuman plays drums and sings, showcasing another dimension of his talent and a style that is totally different from the very recognisable one of Queens of the Stone Age. The unusual stage setup (with Shuman playing drums in the centre, flanked by Dawes on bass and Parkford on keyboards and vocals) echoes their untamed sound, which doesn’t seem to follow a pattern or genre.

They play a few filler tracks that lull the audience for a moment before bursting with energy, as in their cover of Blondie’s Heart of Glass. This slowed-down, hauntingly sexy cover brings another dimension to a familiar track. Anyone who takes on Blondie is bold, but they do it justice while making it sound like something completely novel. For Vertigo, they are joined on stage for a quick verse by Alex Turner from Arctic Monkeys, which ramps up the energy levels of the crowd. His signature drawl adds a dimension of surrealism to the almost hypnotic and tumbling effect of the song, which makes the title particularly appropriate.

Don’t be put off by their name (perhaps not the strongest for a rock band), which does well in disarming members of the audience, making them uncertain of what they are about to hear. There is no need to worry, as song after song sounds like a hit track that is embedded in the listeners’ memories, allowing them to join in with the fun immediately. This makes for a very enjoyable evening of songs that sound like instant classics, without being dated, which is an incredibly difficult balance to strike, and one that they have achieved perfectly.

Watch the video for Vertigo here: