Let It Be at the Garrick 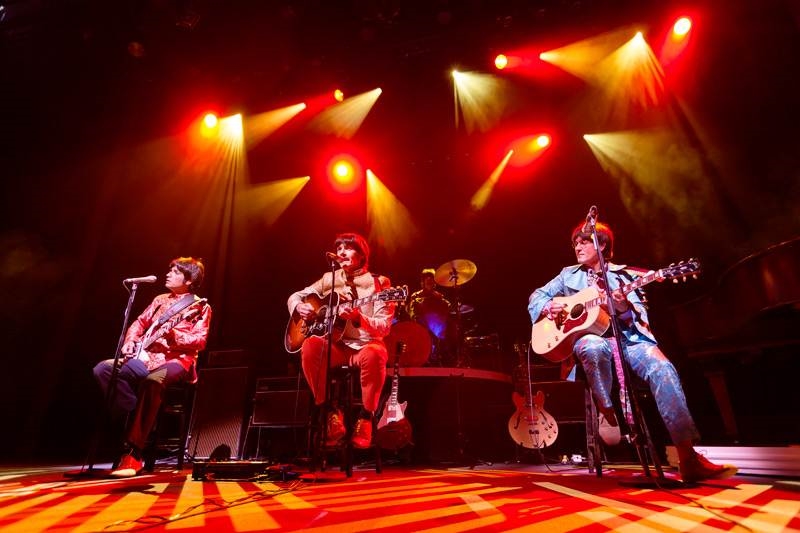 Let It Be at the Garrick | Theatre review

Since premiering in 2012, the proxy mop-tops of Let It Be have toured the world with their live musical extravaganza of The Beatles’ history. Directed by John Maher, every reason why this band holds such a cultural influence resonates within the walls of the intimate Garrick Theatre. Before the first pluck of a string is heard, the unseen announcer’s request that the usage of cameras, flashing lights and mobile phones is…encouraged is an indication that this is going to be a lot more than a quiet afternoon in the West End.

The actors have clearly spent time perfecting the Fab Four’s quirks, and fairly convincingly sing and play each song, from Love Me Do to, of course, Let It Be. McCartney has his cute headshakes and Lennon his (slightly uncomfortable to watch nowadays) “disabled” handclap. Although the other two have less of a role, they play their parts well. Glancing at the surrounding mock TVs that are beaming back the show live, it sometimes feels like one is caprioling back a few decades. Nostalgia sweeps through the room and for anyone that wasn’t there the first time around, this could be as close as it gets.

Starting at The Cavern Club, the numerous costume and set changes required for the band’s evolving periods are handled with ease, through regular curtain closes and voiceovers (plus some very funny 1960s TV adverts) that neatly carry the narrative where just the singing and onstage banter can’t. This is a musical that thrives on the visual as much as the aural, and the production effort is laudable. Even the almost inaudible expletive Lennon utters on the original Hey Jude record isn’t overlooked and adds positively to the feeling that every detail, however minute, is considered.

Despite encouragements coming from the stage to dance and go wild, the audience is reluctant to fully let themselves go. Given that the energy and sound of The Beatles is so pervasive, so unique, this experience lacks that little something overall – like admiring a grainy photocopy of a Picasso. The cast has such a panoply of infectious songs, though, that even a non-fan will leave this excellent tribute act humming a tune all the way home.

Let It Be is on at Garrick Theatre from 4th May until 5th September 2015, for further information or to book visit here.

Watch the trailer for Let It Be here:

Heavyball at The Garage | Live review
The Gallows | Movie review