The Car Man at Sadler’s Wells 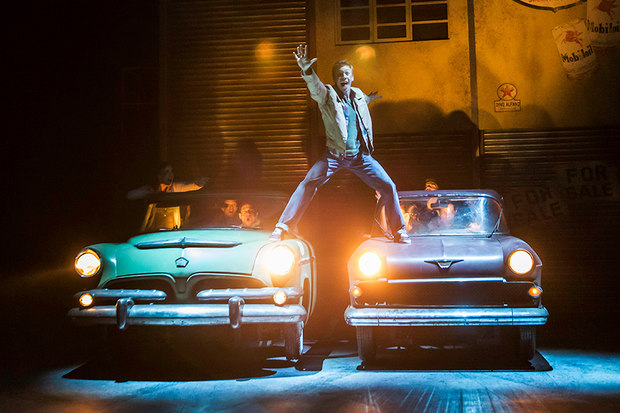 Matthew Bourne’s sensual show The Car Man returns 15 years after its premiere and eight years after its revival, and it seems to receive a warmer reception with each performance. It describes itself as a “re-imagined” version of Bizet’s Carmen, and does share its core elements with the popular tragic opera. Passion, violence, and betrayal are at the heart of the production, and they set the mood for fiery choreographies that seduce and captivate the audience. Bourne combines his talent for physical expression with his passion for cinematographic elements, and the familiar notes of Bizet’s opera further ensure that spectators are engaged at all times. The title purposely echoes the name Carmen, but it also seeks to establish a distinction between the two works.

The Car Man of the title is a mechanic who comes to the small town of Harmony and turns the lives of its inhabitants upside down. He fills a vacancy advertised by the coarse owner of a garage, and very soon notices his wife and begins an affair with her. The story unfolds through a whirlwind of sexually charged dances and intense moments of violence and rage. Moving away from the classical style of Bourne’s adaptations of Swan Lake and Cinderella, The Car Man embraces a bolder, rawer, contemporary approach with a strong focus on masculinity and homoeroticism. Branded a “dance noir”, the production succeeds in setting a dark-yet-playful tone, managing to provide humour in spite of the grim developments in the narrative.

Bourne was initially weary of tackling one of the most re-adapted of operas, fearing that the idea of yet another re-interpretation would not appeal to audiences. He was so drawn to Bizet’s infamous score, however, that he resolved to retain the music and lose the story. For the plot, he borrowed from the 1940s noir genre, more specifically from novel-turned-film The Postman Always Rings Twice. M. Cain’s storyline is still recognisable among the modified subplots and the introduction of new characters and unexpected twists in the story – changes that serve to spice up the original and add a modern flavour. Bourne’s production is a dynamic mix of all that is most appealing about M. Cain’s tenebrous moods and Bizet’s passional notes. Because so many of its elements are recognisable, it will charm spectators effortlessly, engaging them immediately on every level.

The Car Man is on at Sadler’s Wells from 14th July until 9th August 2015, for further information or to book visit here.