American Idiot at the Arts Theatre 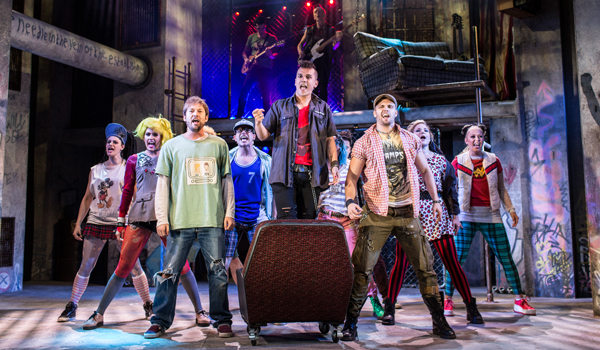 The play bursts into action with an energetic and furious rendition of the song American Idiot in which the intimate cast, built up of strong voices and vigorous dance pieces, capture their youthful social dissatisfaction. Aaron Sidwell as Johnny grows into his role as the play continues. He becomes increasingly disillusioned and this can be seen in the physical changes in how he carries himself. As he falls deeper into the tantalising grasp of Lucas Rush’s intimidating yet seductive St Jimmy, Johnny’s body shrivels whilst he still maintains a distinct presence on stage.

They make great use of the various levels of the desolate scenery. Scene transitions are smooth and effective with the cast acting as crew, while performing quick costume changes. Each member gets a moment to shine and display their talents, whether it be Amelia Lily’s rocky harmonies as Whatsername, or Alexis Gerred and Llandyll Gove as Tunny and Gerard, bringing passion and emotion to their storylines. They are strong supporting actors who demand attention themselves, without detracting from the progression of the story.

The problem lies with the very concept of a musical based on a band’s music. In a show like Mama Mia, the absurdity of the far-fetched story works well with the campness of Abba’s songs. Green Day’s punk rock is, by director Racky Plews’ own admission, the soundtrack to her rebellious teenage years. They are a band that demand that their audience question what they were told. One cannot ignore the irony of a choreographed chorus singing out rebellious anthems in harmony, thus negating its (theoretical) anti-establishment message.

With no interval and a barrage of non-stop grunge, even audiences unfamiliar with Green Day’s music will be able to get involved with the excitable cast. While there is little dialogue in between songs, this means that you have to listen closely to the lyrics of each track to follow the story, which might bring about a new understanding of Green Day’s music for enduring fans, and is a rousing introduction for newcomers.

American Idiot is on at Arts Theatre from 17th July until 27th September 2015, for further information or to book visit here.