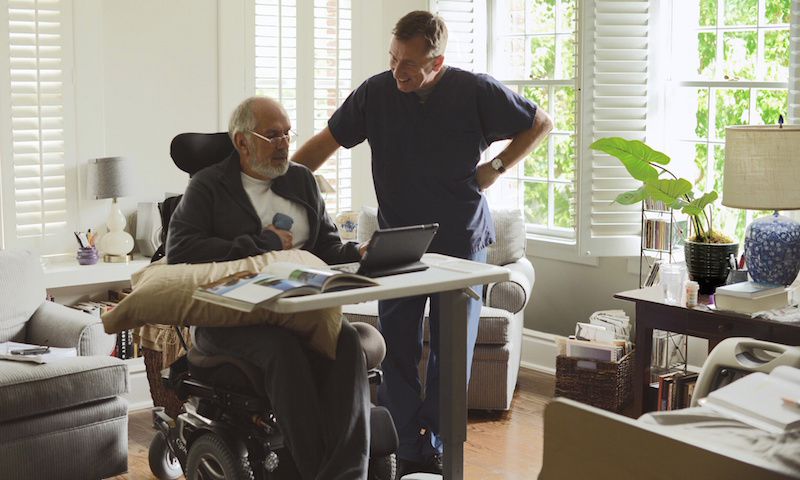 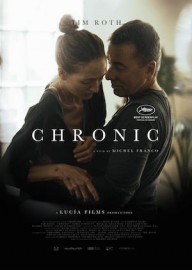 After winning the Un Certain Regard award at Cannes in 2012 with his film After Lucia, young Mexican director Michel Franco is back with Chronic, an intimate study of palliative care for the terminally ill. It’s not an easy watch – at best uncomfortable, many times downright distressing – but you can’t help but be struck with the impression that this is an incredibly important film, forcing us to confront the base unease we feel towards illness and the fragility of life.

Tim Roth stars as David, a home care nurse for the terminally ill in Los Angeles. At first Roth’s typical impassivity may be interpreted as a borderline sociopathic detachment from his work; an early scene shows him washing a dangerously thin and immensely unwell woman who sits totally immobile and unresponsive in a specially adapted shower, carrying out the practical care diligently and professionally but in a silence that feels too unemotional for a scene so intimate and private. However, we quickly learn that David is in fact highly invested in his patient’s lives, arguably to a fault: he indulges in some bizarre behaviour, adopting details from his patient’s lives for his own, even claiming at one point that a deceased woman was his wife of 21 years. Whilst David appears to have very little life outside of his work, it gradually becomes clear that his behaviour may be in response to a tragedy in his own family circle, with Chronic emerging as a poignant character-study into the inner workings of grief and guilt.

Franco uses long takes incessantly throughout, pushing the boundaries of ethical spectatorship to their absolute limits. His style is unfussy and calm, with barely there editing and a non-existent score, perfectly complementing Roth’s low-key and sober handling of his character. So much of Chronic is so horrific, yet there are moments that punctuate with subtle humour, showing personal moments between David and his patients that are touching and sweet. There is a distinct lack of any clear narrative path, perhaps mirroring David’s patient, placid approach to life: Chronic, like David, is never really concerned with what comes next, but is totally invested in the present and the routine, day-to-day lives of the patients as they await death. Nevertheless, there is a sense of foreboding, a knowledge that we are creeping towards a climax.

The viewer, left to make sense of the apparently senseless, must accept that Chronic is not concerned with the question of why, but of simply reflecting on what is. By forcing us to face what we would rather ignore, this is surely a film destined to stay with its viewers.

Chronic is released nationwide on 19th February 2016. It is part of the Debate competition at the 59th London Film Festival.

Watch the trailer for Chronic here: