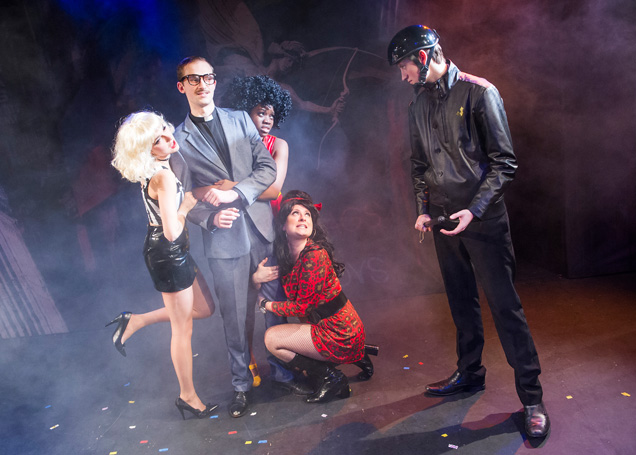 Desperate Measures is the new musical based on Shakespeare’s Measure for Measure, but for some reason set in the 1960s. It features a particularly young cast who perhaps lack the experience to bring the show to life by themselves.

It’s a very clichéd swinging 60s where premarital sex is rampant. The moral crusades, led by god-fearing MP Simon Di Angelo, are winning the public’s hearts and minds, so the current prime minister, Douglas Dukes, appoints Di Angelo to run the country. Morality laws immediately begin to be enforced and pop singer Milo Feather is sentenced to hang. It is up to his sister Isobel, a nun, and newshound Charlie Lucre to fight for his release. Supposedly, this musical carries a warning about religious fundamentalism but that’s hardly clear.

Though it remains close to the bard’s brilliant narrative, Desperate Measures lacks the comedy of the comedy. A few jokes throughout are just enough to cause the odd giggle, but it is far from the side-splitting humour that previous adaptations have achieved.

The musical is somewhat musically challenged too. The music itself is faultless: Morgan Griffiths, Jordan Li-Smith and Keiran Pearson do a great job on their respective instruments. But, while there are some strong voices among the cast, much of the singing feels a little jarring. This is particularly obvious during the many choruses when everyone drowns each other out.

Perhaps the only thing saving Desperate Measures from a one-star review is the phenomenal performance by Ellie Nunn, as Isobel. With her flawless acting and an incredible singing voice to match, Ellie is certainly a rising theatrical star.

Other notable cast members include Jojo Macari as Milo and Alice Jay as his fiance, though we do not get to see enough of them. Alice’s powerful singing is utilised perhaps as much as it can be in the role, though it is a shame that one of the best voices in the cast is hidden away in a less-than-major part. Tosin Thompson also comes across as wonderfully emotional where others lack feeling, but she only gets to play minor roles.

Ultimately, Desperate Measures feels like an amateur student performance. It has its merits but maybe not enough of them to warrant a not-so-cheap night out in London. Nonetheless, it is clear that some of the cast will be dominating the West End in the future.

Desperate Measures is on at Jermyn Street Theatre from 24th November until 20th December 2015, for further information or to book, visit here.