You for Me for You at the Royal Court Theatre 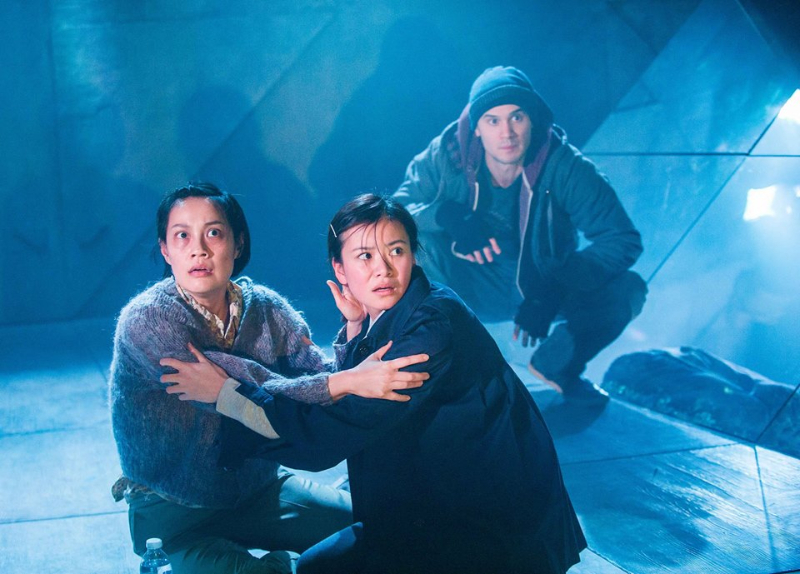 You for Me for You

Director Richard Twyman brings Mia Chung’s modern classic You for Me for You to Chelsea this December. The intimate size of the venue creates an intrusive performance that looks at the political and social differences between communist North Korea and the “best nation in the world”, America.

Sisters Junhee (Katie Leung) and Minhee (Wendy Kweh) live a starved and miserable life in North Korea. With Minhee’s health deteriorating, they set out in search of a better life. Unfortunately, Minhee gets left behind and then the play proceeds to portray the two women’s lives in unison, allowing the audience to draw comparisons between the two.

Although at first the scenery looks relatively minimalistic, it is in fact both impressive and well thought-out. The setting at the Royal Court Theatre allows the actors to walk through and engage the audience, encouraging each member to feel part of the production.

The casting is strong and the chemistry between them all is believable. Leung’s and Kweh’s performance is emotive and intelligent, pushing the public to really see and feel the hardships suffered under the dictatorial regime. You for Me for You has quite a complex narrative to follow, with several themes and ideas layered and intertwined. It offers an honest account of the issues those living in North Korea have faced and the very different lifestyles of those in the Western world.

Knowledge of Korean or American history isn’t essential as the dialogue, the acting and the scenery go a long way to explain everything. It is important to pay close attention however, as it can be difficult to keep track of the ever-changing scenes and the occasional character change. Nonetheless, You for Me for You is well worth the effort, providing an experience that is both informative and moving.

You for Me for You is on at the Royal Court Theatre from 3rd December until 9th January 2016, for further information or to book visit here.

You for Me for You