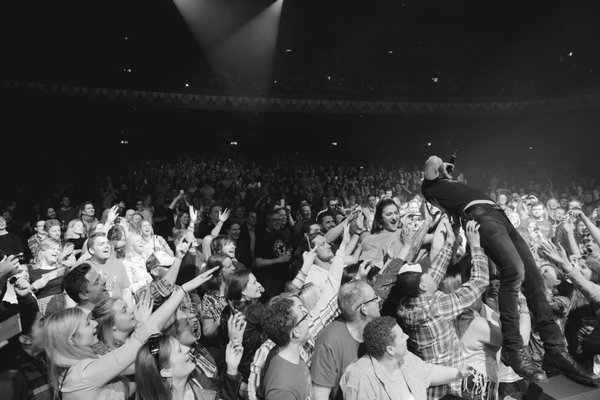 Drunk On a Plane, Bourbon in Kentucky, I Hold On

American country music singer-songwriter Dierks Bentley charms the audience at his packed-out show in London, many of whom have apparently followed on from his Dublin concert. His first major label album in 2003, Dierks Bentley,  and popular songs, such as Drunk On a Plane, Bourbon in Kentucky, I Hold On, clearly spoke to the thousands who now fill the Hammersmith Apollo.

The set’s euphoria is infectious: crowd members are enveloped with laughter as they dance and sing along to the songs, stomping their feet to match the beat. Bentleys’ humbled and homely attitude is something to be idolised – the viewers roar in appreciation as he introduces his band. After every passionate song, he interacts with the crowd like a friend coming home to catch up. There’s a sense of unity and connection as he shoves his mic in the air for the crowd to finish the lyrics. Special moments are continuous, from pulling a fan onstage to take a shot of Patron together during Am I The Only One, to allowing the audience to strum his guitar. Inclusion is key, from the front right to the back, he acknowledges the crowd.

The song changes from sultry, soothing, sweet words of Somewhere on a Beach to another favourite – recognised from the first note – Drunk On A Plane. Everyone moves, and a couple even do the Samba down the aisle. New song What the Hell Did I Say, taken from the not-yet-released album Black, is echoed word-for-word by the audience: “you guys are so hardcore, you know all the songs!”, Bentley says. He includes a fitting tribute to the performance, having the audience raise a glass to dedicate a song to the late singer Prince.

Everyone in the Hammersmith Apollo is brought to their feet, hands clapping, beer flying and country music caressing their ears. Guitar picks, drumsticks and water bottles are thrown from the stage, unforgettable pieces of memorabilia for the lucky crowd. The vibrations of the Apollo combined with the ever-changing lighting is enough to wake everybody up. For anyone seeking a smooth introduction into American country music and a good time, Dierks Bentley is the answer!

Watch the video for Drunk on a Plane here:

Drunk On a Plane, Bourbon in Kentucky, I Hold On

The Polar Bears Go Up at the Unicorn Theatre | Theatre review
Arabian Nights: Volume Two – The Desolate One | Movie review