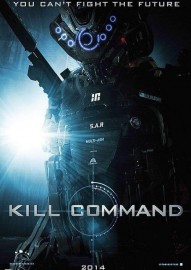 The directorial debut of award-winning visual effects artist, Steven Gomez, Kill Command is certainly one of the best sci-fi horror films we’ve had in the past few decades. The film takes place mostly on an isolated island in the distant future, where machines are becoming a viable replacement for soldiers. A small group of marines are deployed to the island, apparently for a simple training exercise, but something is amiss with the robots and things soon turn deadly.

Unsurprisingly, the visuals are top-notch. The tech of the world is blended in seamlessly; there are no clunky, overdrawn explanations and the robots look incredible (there are several different types, all unique and surprisingly sinister-looking). Many sci-fi films attempt to chill the viewer with machines that are almost indistinguishable from humans but here the decision to go with bared exoskeletons and cold, blue interfaces in place of eyes really pays off. There’s a real sense of menace to these, and though there are a few rather obvious jump scares here and there, the real focus is on suspense, which, thankfully, Gomez has achieved amazingly well. There’s barely room to breathe between the machine attacks and the uncertainty of when they will strike once more. This tension is maintained throughout and has the viewer on the edge of their seat from start to finish.

The performances are sound and, though the script leaves a lot to be desired, the characters are surprisingly intriguing. Of course, among the marines are the same old stock characters – the unprepared butt of everyone’s jokes, the wise-cracker, the double team – but the leads are interesting. Captain Bukes is softly spoken, sniper Robinson uses contact lenses that function as a scope, but by far the most interesting is Mills, a cyborg who was “chipped”, aged 11. Her chip is connected to her brain and enables her to access machines and databases just by thinking. Her presence among the team is another source of uncertainty for them: is she human or not?

The questions Kill Command raises about the morality of using machines instead of humans in warfare are nothing new. But it’s still an enjoyable watch, sure to add a few new mechanical presences to some viewers’ nightmares.

Kill Command is released nationwide on 13th May 2016.