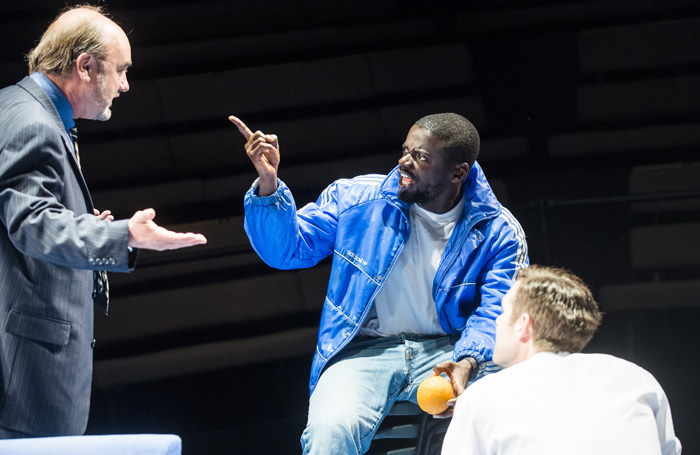 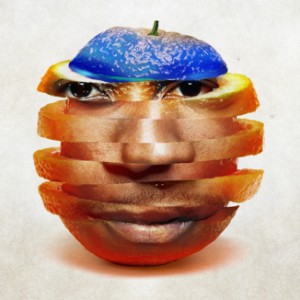 16 years since its debut, Joe Penhall’s play has lost none of its visceral and provocative energy: If anything, it’s more current than ever. Director Mathew Xia is not interested in “some magical, mythic otherwhere” but in the banal reality of the everyday. The play’s strength is its realist minimalism, which contributes to its shock factor as it subverts a seemingly normal scenario. Dealing with issues of mental health, corruption, and racism, Blue/Orange has the potential to be an iconic play of our time.

The square stage takes the form of a doctor’s office in a psychiatric ward, complete with water dispenser, a bowl of oranges – which become symbolically central – and plastic chairs. As the audience enters the theatre, they make their way through an office rather than the normal stage entrance: it feels as if they are also in the hospital. The stage is constructed slightly above this office, with glass panels holding it up, through which theatregoers can be seen shuffling in, and it has the essence of viewing art in a gallery. This construction makes the audience voyeurs from the start, it breaks down the privacy integral to a patient/ doctor meeting and with head consultant Robert’s constant references to The Authority, it subtly takes on big brother elements.

Daniel Kaluuya is astounding as Christopher, a patient confined to a psychiatric ward, who wants out despite the fact he sees oranges as blue. David Haig’s Robert, a seemingly bumbling intellectual, is one of the best performances on stage this year, effortlessly switching between amiability, rage and manipulative scheming. Luke Norris warms into his role as Bruce, initially over-acting (his shouting and hand actions appear slightly affected) but by the end is highly impressive, especially in the closing scenes.

The play is a modern and realistic nightmare. It probes at the quality of mental health care, highlighting how insufficient beds for people who need them is akin to a horror story. It does not preach, however, nor does it “demystify” mental illness, as Bruce seeks to do. Instead it forces the audience to ask questions and find their own answers: in doing so increasing their awareness of society. This is minimalist and startling theatre at its best – it needs to be seen.

Blue/Orange is on at the Young Vic from 12th May until 2nd July 2016, for further information or to book visit here.