Win two tickets to The Shadow King at the Barbican 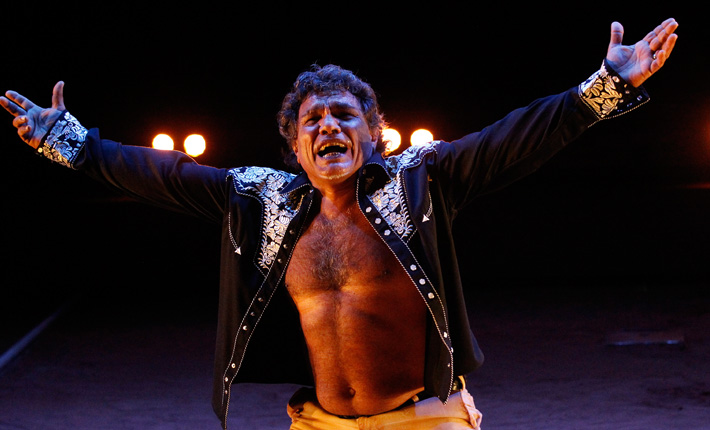 Competition: Win two tickets to The Shadow King at the Barbican

The Upcoming has two tickets to a performance of The Shadow King at the Barbican.

Transposed to Australia, this production presents Lear as the leader of an indigenous community in an immensely powerful and irresistibly charismatic performance by Tom E Lewis. Rather than a peaceful retirement surrounded by a loving family, his becomes a spectacular fall with consequences coming at a fast and furious pace.

The dynamic set design is ingenious and a live onstage band underscores the action. The land is an ever-present character, dominating the stage with spectacular widescreen video projections taking the audience from the suburbs to insanely wild landscapes and breath-taking skies that dwarf the tragic players. The total effect is haunting, leaving an indelible impression.

Tom E Lewis played the title role in the 1978 Fred Schepsi film The Chant of Jimmie Blacksmith and his documentary Yellow Fella was the first Australian Indigenous documentary to be selected for the Cannes Film Festival. The Shadow King won Michael Kantor “Best Director” at Australia’s prestigious Helpmann Awards.

For a chance to win a pair of tickets to a performance of The Shadow King, take a minute to answer the question below, follow us on Instagram here and send your answer to competitions@theupcoming.co.uk together with your full name, address and mobile number by Thursday 30th June 2016 at 1:00pm. We will cross check your name in the list of Instagram followers.

Where is the Malthouse Theatre?

a) Australia
b) Brussels
c)  Canada