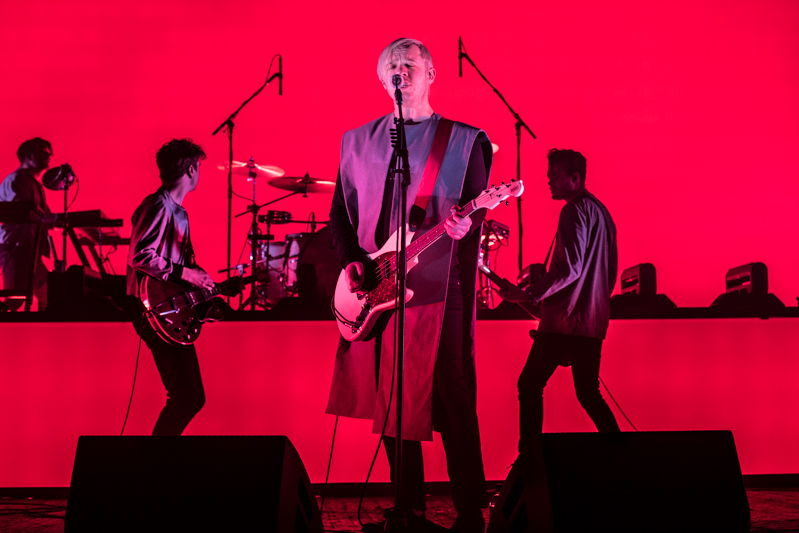 In deepest darkest Kent, you may find something quite special, if you look just about hard enough. Tucked away in the woods, out of sight but hardly out of mind, you may stumble upon The Neverland, three separate worlds combined by one common theme: never growing old. The Neverland is the most contemporary incarnation of the famous LeeFest – that of Google advertising fame and arguably the most organic and home-grown of the myriad of festivals sprouting up all over the country. It began as a party in founder Lee Denny’s parents garden ten years ago and has since morphed itself into one of the undiscovered delights of the summer.

Opening up the Thursday night was art-rock extraordinaire Everything Everything. Taking the stage in their now customary grey suits, singer Jonathan Higgs and co. certainly weren’t in the mood to hang about, with set opener Blast Doors erupting the somewhat miniature Tootles Circus stage into a cauldron of guitars and screeching falsetto. Who can blame them though? 130 shows on the back of their 2015 release Get to Heaven is no easy task, but the practice has, without a doubt, done them the world of good. The sound was instantly there; the snap crackle and fizz that has become the trademark of this band took no time to get going, and the assorted revellers were bouncing about almost instantly.

After a sold-out headline show at Somerset House merely a few weeks ago, Everything Everything is on the crest of a wave that shows no sign of slowing down. The confidence is staggering as they steered their way through crowd favourite after crowd favourite. Kemosabe is a jazzy dance number that got all present shuffling away, bright chords and seemingly effortless vocal layers aplenty. Regret is as good a pop song you’ll hear all year, and the moment the telling drum beat began, the audience immediately played along, belting “Regret! Regret!” back towards the stage at an awesome volume.

Everything Everything’s sound is so difficult to nail down, as it swings so wildly from one genre to another almost instantaneously. Nowhere is this more apparent than set closer Distant Past, which sounds like it appeared straight out of Dizzee Rascal’s rhyme-book. It’s anthemic, and the perfect dessert to what had been a wholly filling hour-long main course. If there is one consistency with Everything Everything, it’s the musicianship and skill required to deliver such complicated melodies with such consummate ease. If they can continue to impress their fans and critics, bigger and better things will surely follow.

Next up was Ghostpoet, the somewhat sanguine London rapper happily bringing material from his Mercury Prize-nominated catalogue to the The Neverland. It was a somewhat subdued start from Obaro Ejimiwe and his collected musicians, as the minimalist style of his compositions were almost entirely at odds with the frenetic blitz of Everything Everything. It took some getting used to from the audience, but by the time the simplistic guitar lines of Plastic Bag Brain wafted out over the collected masses, the mood changed. The melodies that won Ghostpoet such acclaim are deeply nuanced, and on record, almost monochrome in their content. This is not the case for them live, as it’s clear the group worked hard to produce something a bit more hard-hitting for the festival circuit. Guitar solos raged at the end of Sloth Trot and, for half a second, you would be completely forgiven for forgetting you were supposedly watching a rap act.

But as Ghostpoet has proven before, and again last night, he’s more than just a rap act. He combines all elements of popular music, from spoken word, to jazz, to soul and rock. It may sound hectic as an idea, but credit where credit is due, it works perfectly on stage. Liiines finished off a wonderful hour of songs and is arguably the best of the lot. Whilst the group struggled at times to really engage the audience – who may have had their minds set on something a bit more energised to satiate their hunger for a party – those who remained throughout were rewarded handsomely.

Afterwards, as DJ Luck and MC Neat began to spin up their garage anthems, the entire site was seemingly content. Some wandered over to the Mermaids Lagoon to continue the festivities, others wafted back to their campsite for a well-earned rest. As first days go, it was superb and a more than adequate amuse-bouche for a well-catered weekend of music that is rapidly forthcoming.

For further information about LeeFest: The Neverland visit here.

Check back tomorrow for an update of Friday’s acts, including Little Simz, Roots Manuva, Circa Waves and Oscar.